Create games in ways previously unimaginable with the Workshop! The Workshop is a simplified game scripting system that expands the customization features available in the Game Browser. Within the Workshop, you'll create a Script to add Rules and unique play Conditions on top of the established Overwatch game modes you already know and love. Rules can do many things, like change how a hero's movement and abilities work, modify how players are damaged or healed, or even display text under certain circumstances.

One hot game mode you can create is Molten Floor, where your hero will catch on fire if they're on the ground: 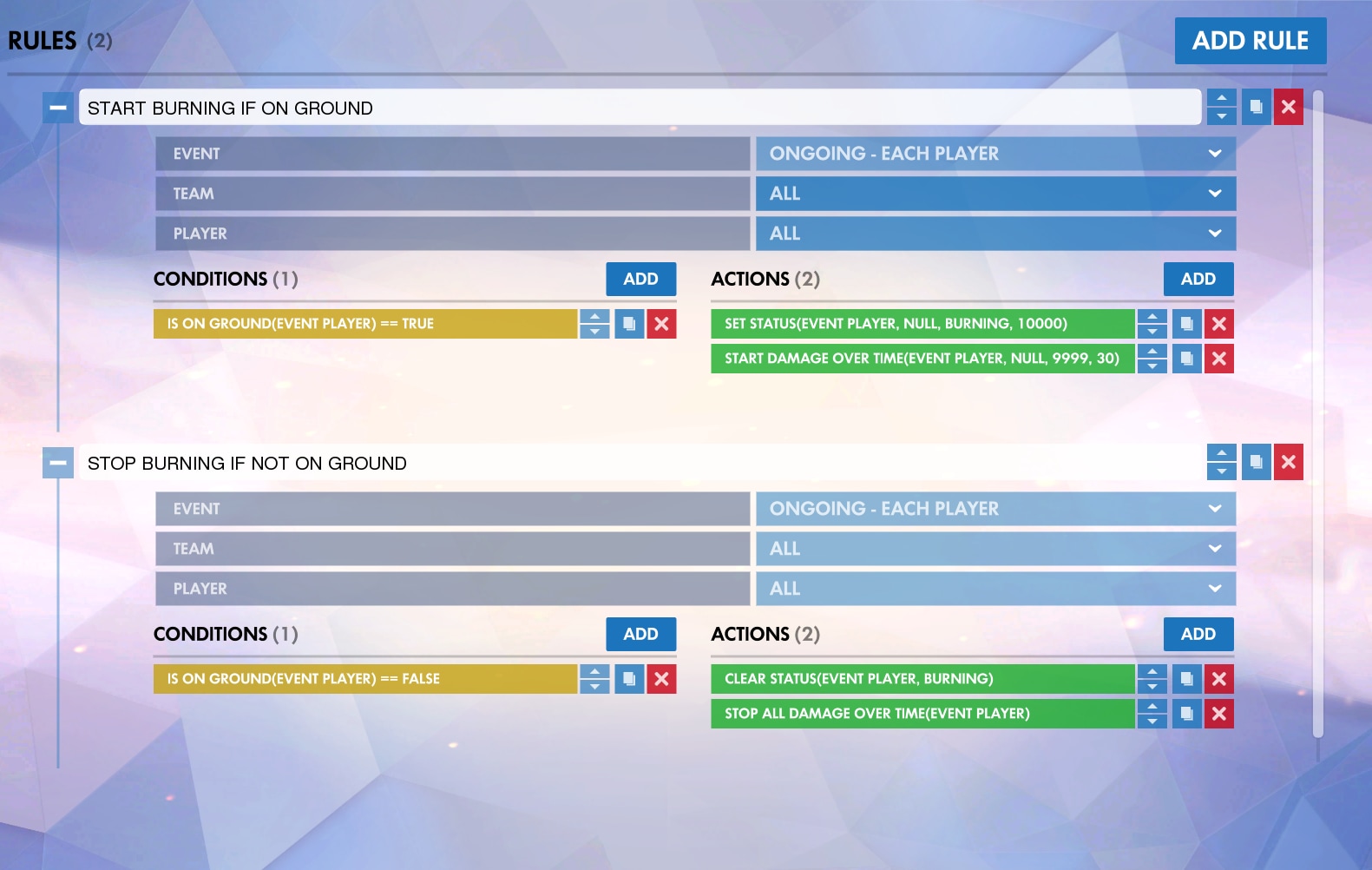 To create a Script, you must:

Once you do this, you can add as many Rules, Conditions, and Actions as you have room for.

Rules are highly customizable pieces that make up your Script. Each Script must have one or more Rules.

An Event defines when the Rule will be executed. When an Event happens in-game, an Instance of the Rule is created. Each Instance evaluates Conditions and executes Actions independently of other Instances.

Once a Rule is created in the editor , an Event is automatically added. You must specify what type of Event you'd like.

To specify an Event type:

After you've added a Rule and an Event, you have the option to add one or more Conditions. Conditions are a list of things that must be true before the Rule can execute its list of Actions. If the Condition belongs to a Rule with an Event type of "Ongoing - Global" or "Ongoing - Each Player," it's checked continuously to see if it's true. If it belongs to a Rule with any other type, it's checked whenever the specified Event occurs. If a Rule has no Conditions, the Action list will attempt to execute as soon as the Event occurs. Each Condition is made up of two Values, which use an Operator to compare and check to see whether or not they are True. See Values for more information.

To add a Condition:

An Action is something that modifies the game. They are executed in order from top to bottom. For the list of Actions to start executing:

To add an Action:

Actions with a Reevaluation Input

Although there are many potential Actions, there are a few you should be aware of:

Loop is an Action that causes the execution of the list of Actions to restart from the beginning. There are four types of Loop Action:

A Loop Action is only allowed if a Wait Action is guaranteed to execute before the start of the Action list.

Wait is an Action that causes time to pass before a subsequent Action can execute. The minimum wait time is 0.25 seconds.

There are three behavior options for the Wait Action:

The String Value generates a string. It has the following Inputs:

Strings can be combined to form more complex strings:

Strings can't be used in Conditions or stored into Variables because of complications with players using different languages in the same Custom Game.

A Value is a piece of information—or an instruction on how to obtain information—provided to the Input of a Condition, an Action, or another Value. Values can be combined with each other.

There are many, many Values, so we won't define them all here. However, they are defined in the Workshop Editor. Here are a few that you're likely to see:

A Value may be stored into an Array, which is a collection of multiple Values.

There are two types of Variables in a Script:

There are three operations that can be performed on a Variable:

Ready to get into the Action? Try creating one of these game modes! We'll walk you through what you need to add and why:

We're going to walk you through creating Molten Floor, a game where heroes burn and take damage if they're on the ground.

Here's a more extensive walk through of a game mode, Mirrored Deathmatch. In this game, there are multiple short rounds where everyone plays the same hero. At the end of each round, each player respawns where they were as the next hero in a randomized, predetermined list. When the final round ends, the player with the most kills wins.

So, let's make a Script for Mirrored Deathmatch!

Once you've created a Script, you can use the Workshop Inspector to view your Script executing in-game, see what Actions and Conditions are active, and view any issues with your Script.

The Workshop Inspector is composed of a few things: 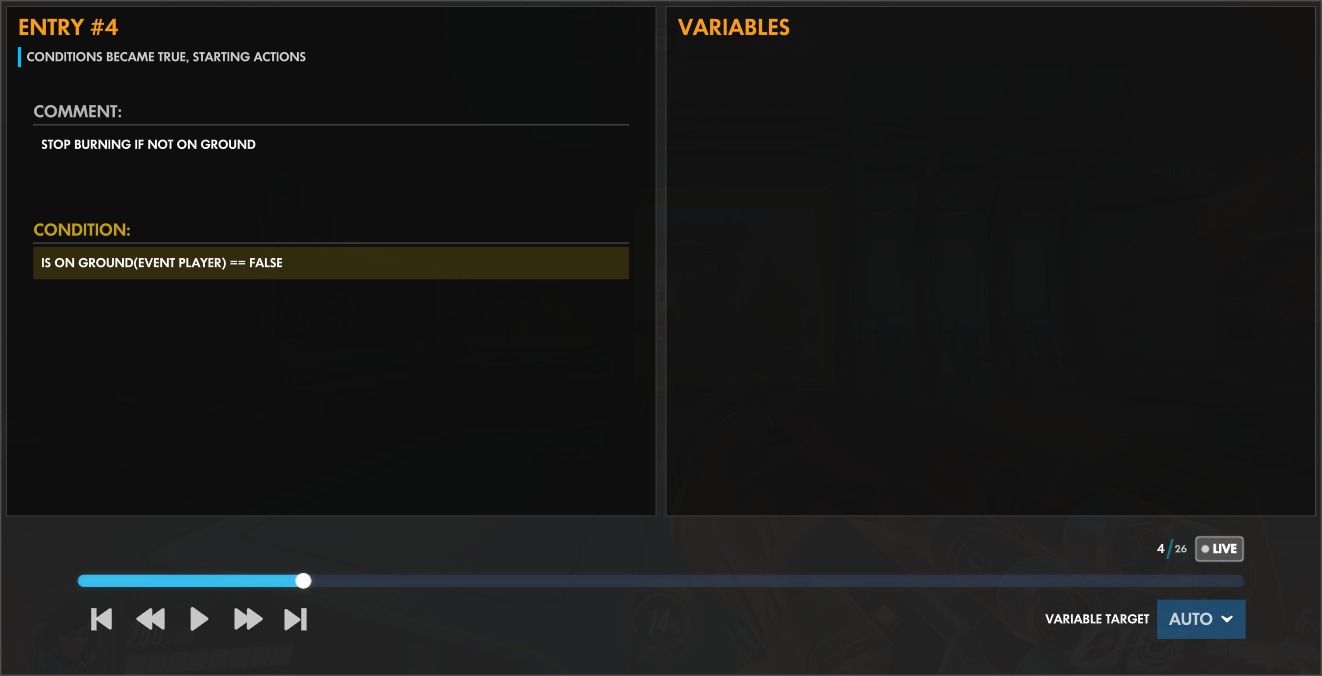 Once you've created an awesome Script, you can share it with the world (or just your friends) for the next six months. The scripts you create can be used on any platform, regardless of which platform you made it on.

If someone has shared a Script that you'd like to use: