It’s never too late to get in on the action. Bring the adrenaline-pumping excitement of the Overwatch League Grand Finals from the big stream to your computer screen during the Overwatch Free Weekend.

From July 26–30, we're calling on all prospective agents: assemble your teams and dive in during the Overwatch Free Weekend on PC!

For this free weekend, we're making Overwatch's full roster of 28 heroes—including Wrecking Ball—and 18 maps available for play in a variety of modes, including Quick Play, Custom Games, and the Arcade. Players will also be able to level up, earn Loot Boxes, and unlock a variety of different customization options for their heroes.

Plus, if you decide to purchase Overwatch after test driving the game, you'll get to keep any progress that you made during the weekend—just be sure to use the same Blizzard account that you played on.

For more details and to learn how you can participate, read on below!

The Overwatch Free Weekend will run from July 26–30. All Windows PC users with a Blizzard account will be able to download and play Overwatch for FREE during this period—no special keys or sign-up codes needed!

The free period will begin on July 26 at 11:00 a.m. PDT and end on July 30 at 11:59 p.m. PDT in supported regions. If you'd like to see when the weekend will go live in your region, check out the reference guides below. For additional time zone assistance, please visit timezoneconverter.com. 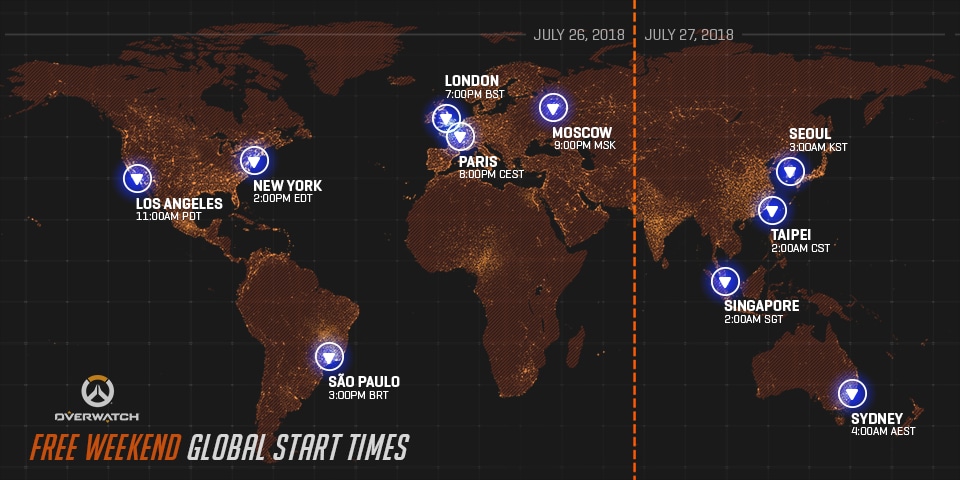 The Overwatch Free Weekend may not be available in all regions. See our FAQ for details.

Before your watch can begin, you'll first need to install Overwatch on your PC. To install and play on July 26, please follow the instructions below.

Step 1: Download and install the Blizzard Battle.net desktop app, if you haven't already, and launch it.
Step 2: Create a free Blizzard account, or log in with an existing account.
Step 3: Click the Overwatch icon, located on the left-hand side of the Blizzard desktop app.

Step 4: Select your region from the drop-down menu, then click "Install" to begin the installation process.
Step 5: Once installed, click "Play" to begin!

The Overwatch Free Weekend client will be available for download from July 26–30.

For more information on which countries are associated with each of our Blizzard gameplay regions, click here.

Q. How many heroes are available in Overwatch?
A. There are 28 heroes available to play in Overwatch! To learn more about these heroes, click here.

Q. How many players does each mode support?
A. Quick Play maps supports 12 players in a 6v6 format. The Arcade features alternate games modes and maps that support players in 1v1, 3v3, 6v6, and free-for-all formats.

Players can also learn the ropes in a series of training modes: Tutorial, Practice Range, and Practice vs. AI.

Q. Will my progress from the Free Weekend carry over if I purchase Overwatch later?
A. Yes. Any progression you earn, including levels as well as skins and other items you get from Loot Boxes, will carry over to the full game if you purchase Overwatch® Standard Edition, the fully-loaded Overwatch® Legendary Edition, or any version of Overwatch on PC—just be sure you purchase the game on the same account you played on during this free weekend.

Your stats will also be retained. (Achievements, however, have been disabled for the Free Weekend.)

Q. Will PC and console gamers be able to play together during the Free Weekend?
A: No, cross-platform play is not available in Overwatch.

Q. Will there be any sort of maintenance planned during the Free Weekend?
A. There's no downtime or maintenance currently planned for the Free Weekend. If this plan changes at any point, we'll be sure to provide information about major service interruptions in the official forums. For additional status updates, be sure to follow @PlayOverwatch on Twitter.