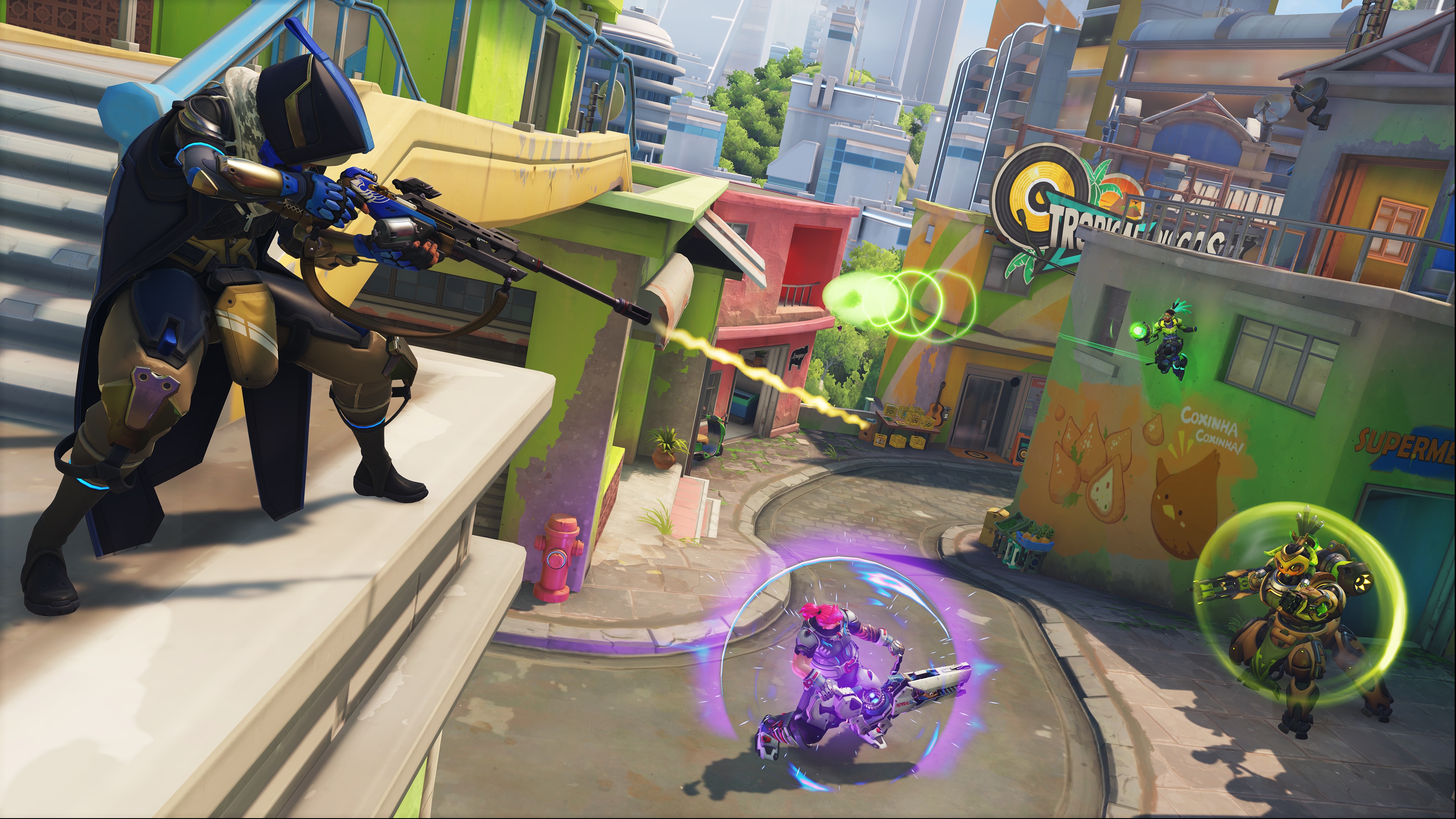 Update, December 9: We'd like to provide some clarity regarding end of season competitive rewards. The amount of Competitive Points awarded is based on the highest skill tier you finished the season at across any roles, including Open Queue.

Competitive play has been at the heart of the Overwatch community for years, and we have long-term plans to nurture this game mode far into the future. We're excited to share how we’re updating Competitive in Overwatch 2, starting with the goals that guided our decisions.

First, seasons should be exciting and tell their own, individual stories. Each one should take players on a new journey with new heroes, maps, game modes, or balance changes.

Second, we believe losing games shouldn’t be a purely negative experience. Competitive players should feel a sense of progression after games, and we want to provide players with the tools needed to improve and rank-up.

Finally, we need an improved Competitive experience for returning players—for the benefit of both them and their teammates.

Overwatch 2 will not have portrait levels, and match experience will go towards leveling up your Battle Pass. New players who create an Overwatch 2 account on or after October 4 will play through a guided First-Time User Experience (FTUE). They will need to complete FTUE and win 50 Quick Play matches before Competitive unlocks.

This gives new players time to prepare for the higher expectations that come with Competitive, while veteran players don’t feel discouraged by teammates who have less experience. In the process of unlocking Competitive, we analyze new player skill levels to optimize matchmaking in a way that feels good to everyone. This only affects accounts made on or after the October 4 release date: anyone who has Competitive unlocked prior will have access to Competitive in Overwatch 2.

SR is being replaced by Skill Tier Divisions in Overwatch 2. We made the decision to remove SR as a numeric value to relieve the sense of being stuck at a certain rank. Seeing your SR go up and down after each match almost felt like taking a test with the teacher passing or failing you based on each individual question rather than your complete work. It was a lot of pressure, and it doesn’t give players an accurate representation of how they’re performing overall in Competitive.

Tiers still exist in Competitive—Bronze through Grand Master. Each tier will have five divisions ranking from 5 (lowest) to 1 (highest). As you progress through each tier, your division will count down until you rank up to the next tier. Top 500 will not have tier divisions.

Tier Divisions represent the same skill levels as SR, but they give players a higher-level view of where they’re placed in Competitive. Each division represents approximately a 100 SR range. Players will receive a competitive update every seven wins, or 20 losses, instead of every single game. 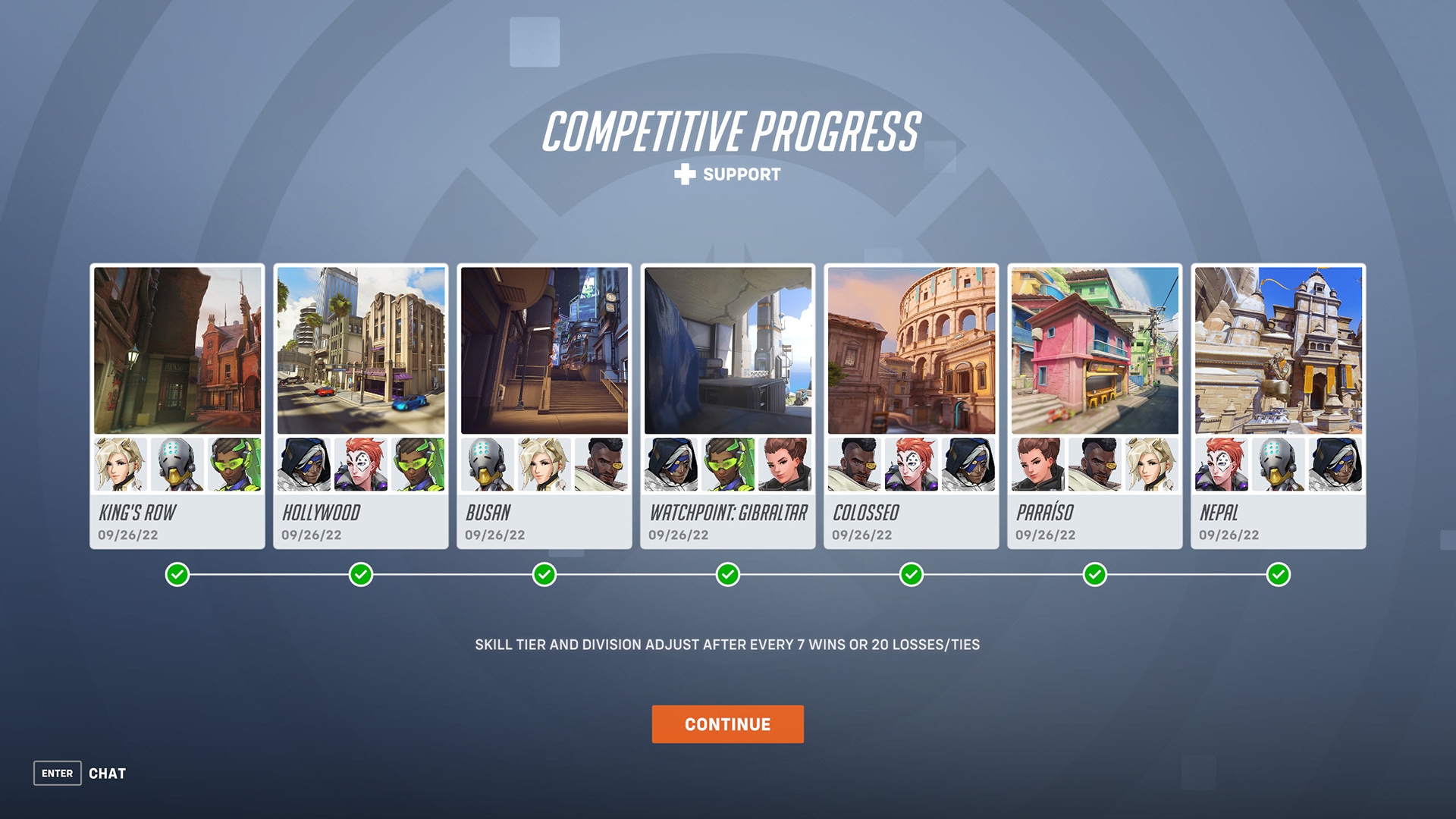 Competitive updates will show your progress and adjust your division, if necessary.

Looking at the past seven or 20 games as a collective helps you better understand how you're performing in Competitive rather than putting a ton of pressure on each individual game. We want you to feel like you’re improving and being rewarded for advancing from the first day you start playing Competitive in Overwatch 2.

We’re making some changes to the Competitive UI based on feedback that we’ve seen in the community. Portrait borders that symbolize player level are going away from all game modes in Overwatch 2, and Competitive skill tiers will no longer be displayed before each Competitive match. Skill tier and division aren’t completely aligned with the matchmaking rating we use to determine matches. To this end, this screen has been redesigned so you can instead display your name cards and titles.

The introduction of the new scoreboard will help you identify your team's needs and adjust your strategy accordingly. We’re removing medals from the scoreboard because they were too arbitrary to paint an accurate picture of a player’s contributions to their team. Our goal with this new scoreboard is to communicate information about how the match is progressing in a more open and transparent way. 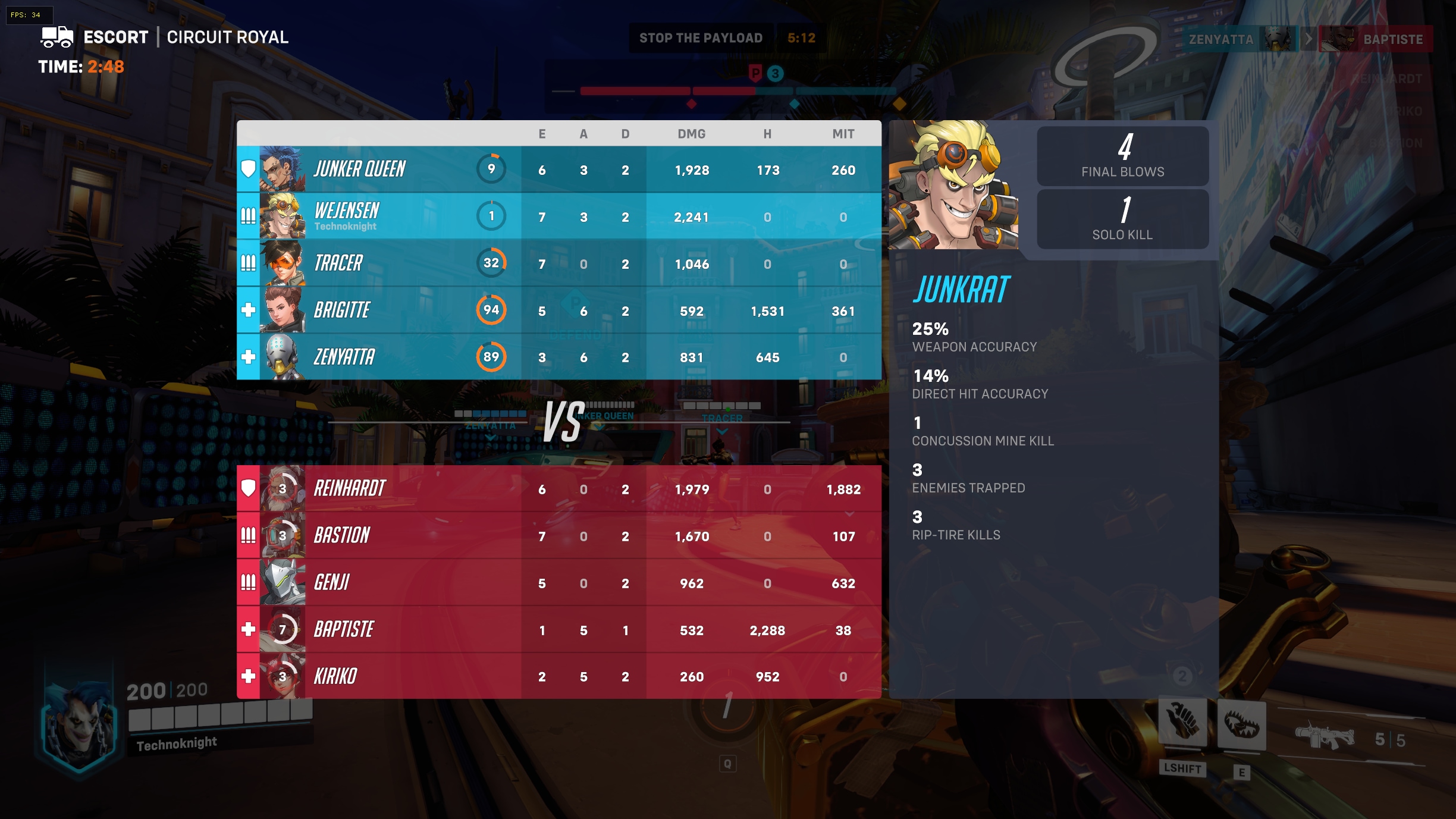 Finally, the new ping system gives you a new tool to communicate with your team. It’s no surprise that teams with better synergy win games. You can use the ping system to better coordinate with your team without having to speak, and the system is also an effective way to enhance voice callouts with in-game cues.

Placement Matches and Season One

The placement system from past Competitive seasons is changing in Overwatch 2. Instead of playing five matches without a rank, you’ll be unranked until your first competitive update after the first seven wins or 20 losses. You can expect to start in lower Skill Tier Divisions after placement matches and progress the ranks throughout the season.

All players that were ranked in Competitive prior to Overwatch 2 will have their rank modified post-launch. Overwatch 2 is a very different game, so we applied a formula that gives returning players an opportunity to redefine their rank when they dive into updated Competitive. Most players will find their rank is slightly lower when they start out, as they will be learning new concepts and metas. However, players who got to learn more about the game in our betas, or who follow the Overwatch League, may find themselves ranked higher than ever.

We’ll introduce a new section to the Career Profile where you can find your replays and highlights—further enabling you to learn and grow from your gameplay experience. We’re adding a new feature called Game Reports under the History tab in your Career Profile. Game Reports provide a detailed summary of all the matches played in your current session of Overwatch. 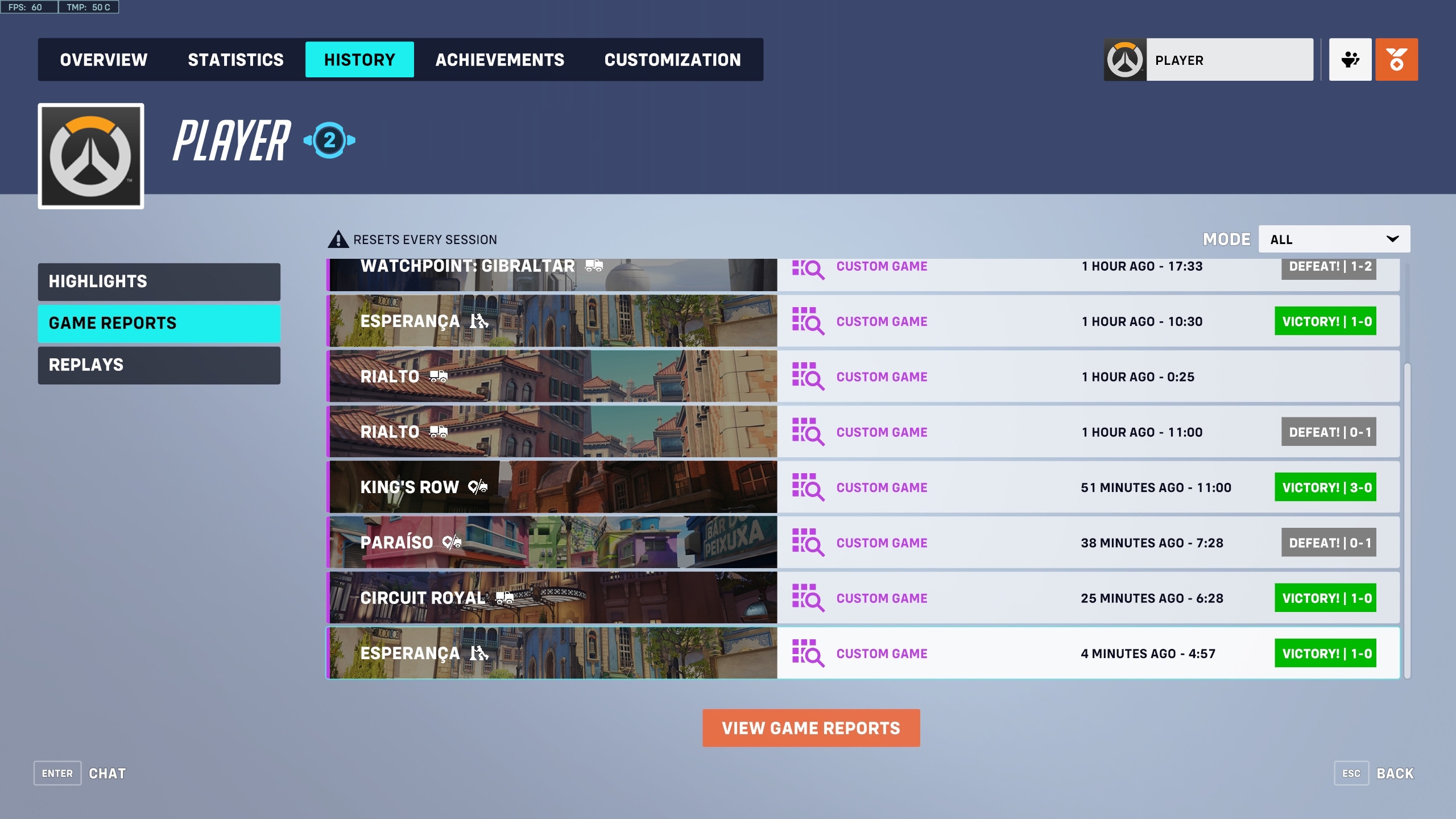 These reports show you an overview of all the matches in your current session broken down by game mode. Opening a match will further expand your stats including an overview of how you played, which heroes you used, and other match information. 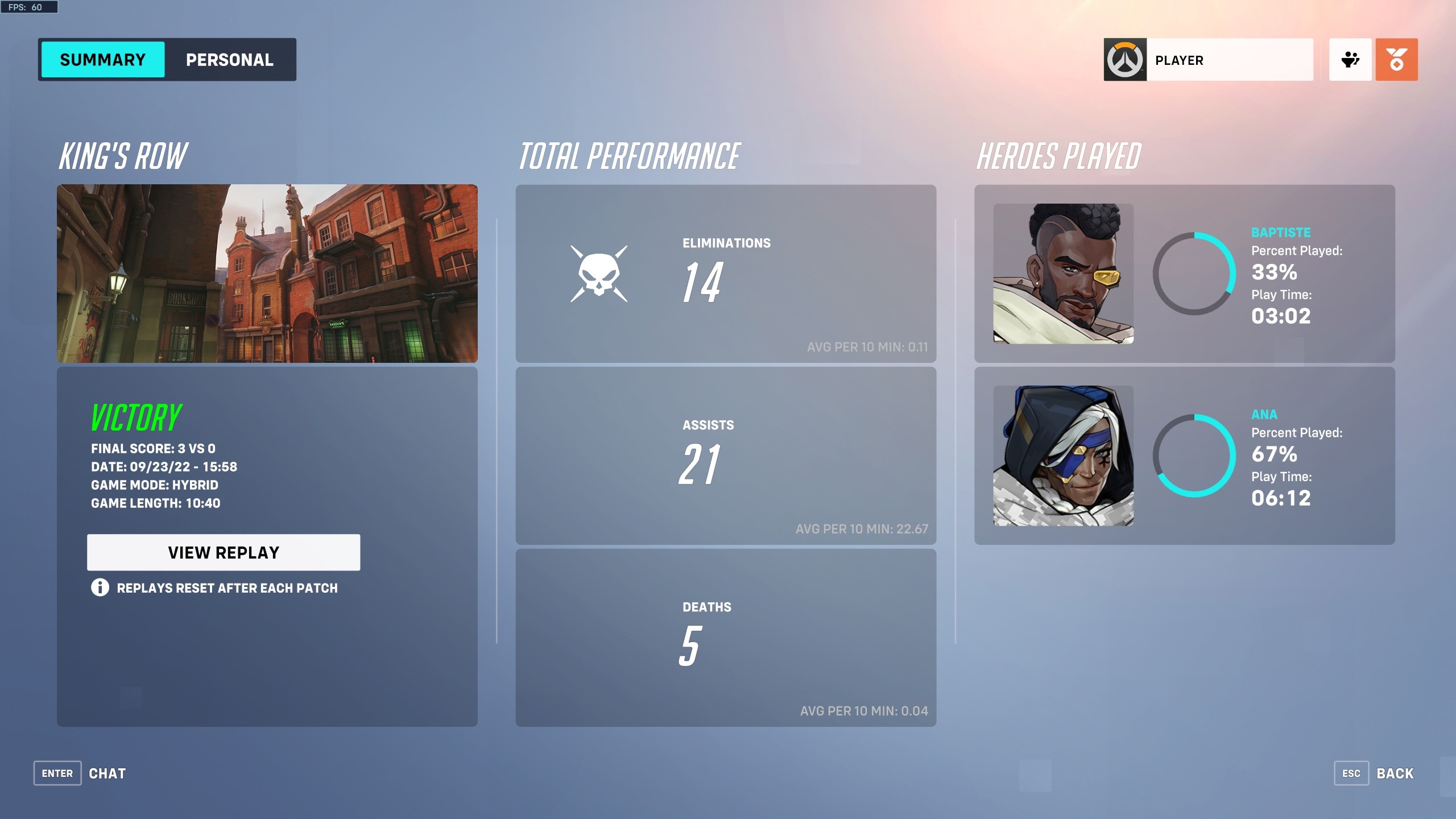 Clicking on heroes played will expand on your stats and other handy information from each match’s scoreboard. For example, if you played Ana during a match, your personal stats will show Biotic Grenade kills, enemies Slept, and Nano Boost assists. Likewise, other heroes will have specific statistics to give you a detailed report of how you performed on any hero. 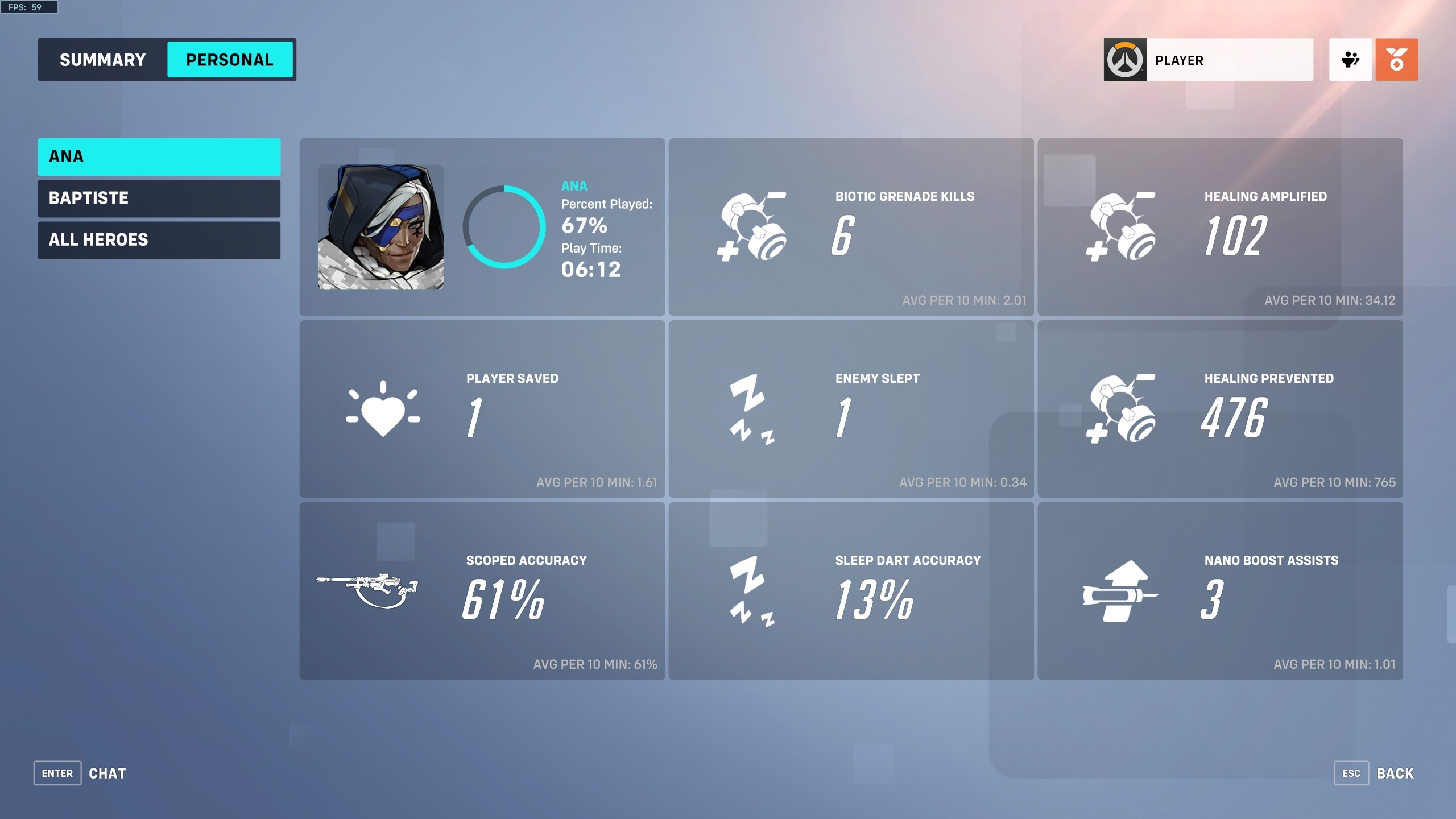 In a future update, we’ll have your recently played matches persist across sessions, meaning even if you log off, you can jump back on and review them at a later time. We’ll also introduce a timeline feature to check out key moments from the match and review the final results of the scoreboard.

Our team has also been considering how to approach players who have not played Overwatch recently. Players who haven’t played recently are less likely to maintain their actual prior skill output in a match. To help account for this and make matches fairer, players who haven’t played in a while will find their internal matchmaking rating lowered to help us re-evaluate and determine their current skill level. We'll also adjust their internal matchmaking rating more quickly, up or down, as they play matches after returning. Returning players will therefore quickly get back to their appropriate skill tier and division as they continue to play.

Competitive season will be aligned with our overall seasonal schedule, including the Battle Pass. We’re removing the commemorative sprays and icons players earned each season, including the top 500 sprays and icons. We’re introducing new limited Competitive titles for your name card that you can earn as you climb the ranks. These titles will be a way to show off to other players how high you climbed in a season. You can only earn these titles at the end of the current Competitive season and only use them in the season following.

Competitive Points will continue to be the reward currency for winning Competitive matches, rewarding 15 points for a win, and five for a draw. Earning 3,000 points allows you to unlock a Golden Weapon for any of Overwatch’s heroes, including new heroes like Sojourn, Junker Queen, and Kiriko. However, we’ll be capping the number of bonus Competitive Points earned at the end of a season to the highest skill tier you reach in any of your roles, including Open Queue.

These changes are the beginning of our new Competitive experience in Overwatch, and we’ll continue to watch for ways to deliver fair and exciting matches in our core game mode. Upcoming features include a skill progression report each time you get a competitive update. We can’t wait for each season to provide a new chapter for everyone looking to grow their skills, and our team looks forward to all the changes coming to Competitive in Overwatch 2!