Let the Kitsune guide you: A first look at Kiriko's concept and playstyle

She's been on all our minds since we teased her in the June reveal event, and now, she’s here. Kiriko Kamori is staged to join the support roster as Overwatch’s 35th hero, and we’re excited to share more about her personality, toolkit, and gameplay!

Drawing on her Miko and Kunoichi training, Kiriko supports her team through gentle healing, deadly precision, and fluid mobility. The early idea for her kit was to create a dual damage/support hero with strong mobility and a high skill ceiling. Kiriko can be rewarding for high-skill players while also being a great healing option for beginning players.

She was created by narrative and hero design mostly in tandem since Kiriko’s concept art was originally drafted for a PvE enemy from the ninja ecology. Her concept art inspired the direction of both her gameplay and narrative, and we’re happy that her big personality shines through her playstyle. 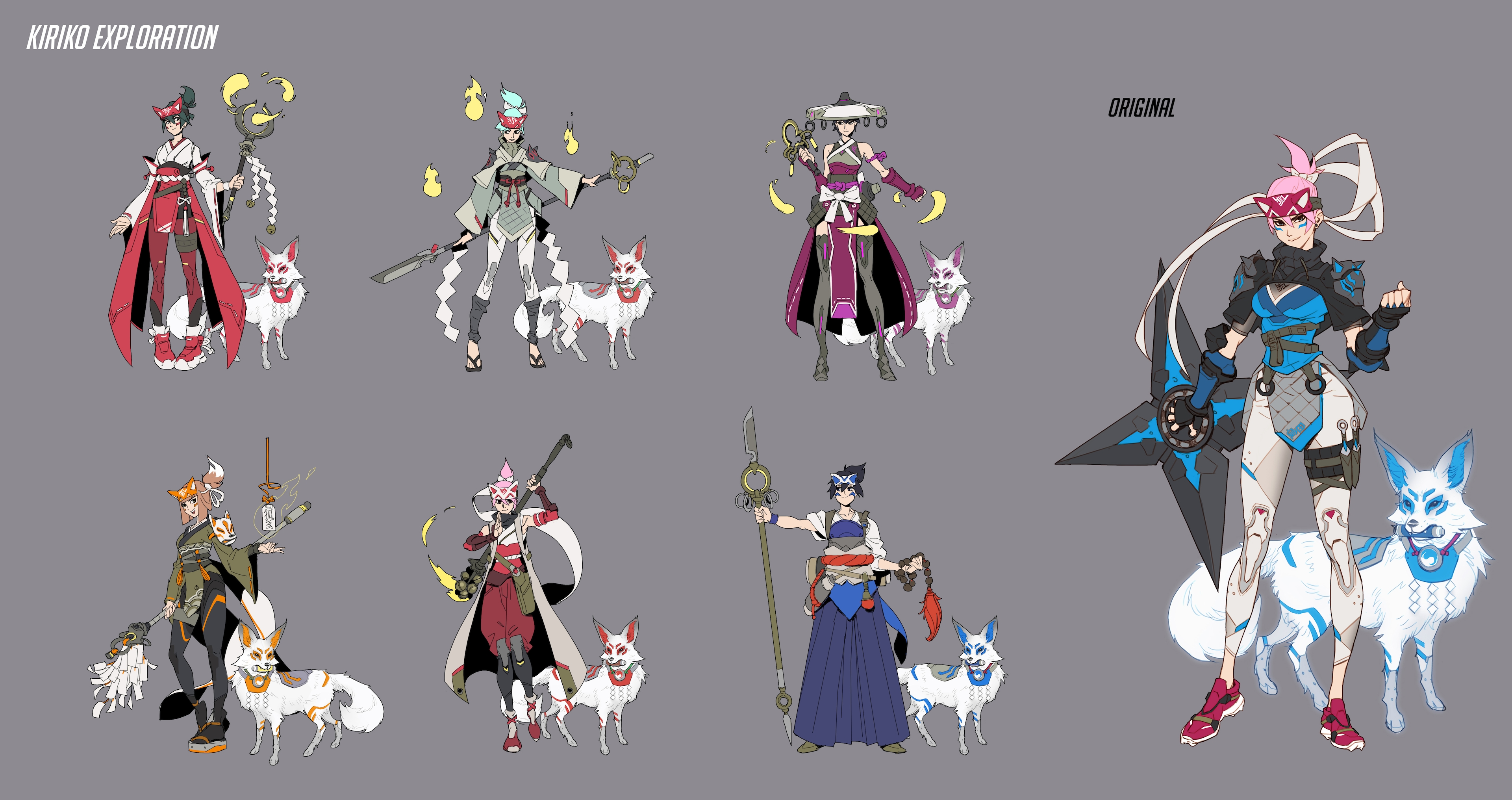 To hear more about the process of bringing Kiriko from concept to launch, we talked to three designers who worked on her: hero designer Josh Noh, and narrative designers Justin Groot and Kyungseo Min.

Kiriko’s primary fire, Healing Ofuda, are talismans that heal her teammates. She fires up to ten healing projectiles depending on how long the primary fire key is held. Healing Ofuda is a single target heal, with blue talismans that home in on allies and turn yellow when they heal; the charms are breezy and slow, so the further you are from your teammates, the longer it will take to heal them.

"The visual and sound effects associated with Kiriko's primary heal draw on themes from nature, and we tried to match this in her lines," Groot explains. "So, you'll hear Kiriko say things like 'The breeze brings relief,' or 'Like a gentle rain,' when she heals allies."

Her breezy, tranquil primary fire is a stark contrast to the tempo of her next ability: Kunai. Kiriko’s secondary fire, Kunai, are small, leaf-shaped knives that she throws one at a time. The knives have low overall damage but do additional critical damage—and Kiriko isn’t afraid to taunt enemies who get caught in her Kunai’s path.

“Kiriko is a mischievous person, and she'll sometimes tease the enemies she eliminates,” says Groot. “She’ll say things like, ‘I thought you were the sniper’ when she lands a kill on Widowmaker or Ana.”

Kiriko’s passive ability, Wall Climb, allows her to scale up walls. "We decided on Wall Climb because Kiriko went through the same training as Hanzo and Genji, so it makes sense they would share some of the same background,” Noh explains, “And, like each of the Shimadas, Kiriko also has special mobility skill that’s specific to her.”

Swift Step allows Kiriko to teleport directly to an ally within a certain distance—even through walls. When you activate the ability, you need to have a target before you can confirm the movement. Confirming an ally will let you go directly to them.

“Seeing your teammates die behind walls can be frustrating,” Noh explains, “You see your team’s health bar ticking down through walls, but you can’t quite get a line of sight on them.” With this ability, not even walls will prevent Kiriko from covering a generous amount of space to help her teammates!

She loves to kid around with her teammates, so you can expect to see some witty interactions with her teleport.

“Although she’s a fierce hero, Kiriko loves to play,” Min says. “She’ll give Cassidy a “Howdy” when she jumps to him, and she tells Mercy, “I’ll be YOUR angel” when Kiriko jumps to her.”

Swift Stepping at the right time, though, is key to utilizing the ability effectively.

“You want to be careful about traveling to injured teammates because something’s probably going on over there if their health bar is in the red,” says Noh.

Once you teleport into the line of fire, you won’t be able to Swift Step back out until the ability is ready again. This might sound dangerous, but like every good fox, Kiriko is full of tricks. When fights take a turn for the worse, she has another ability up her sleeve. 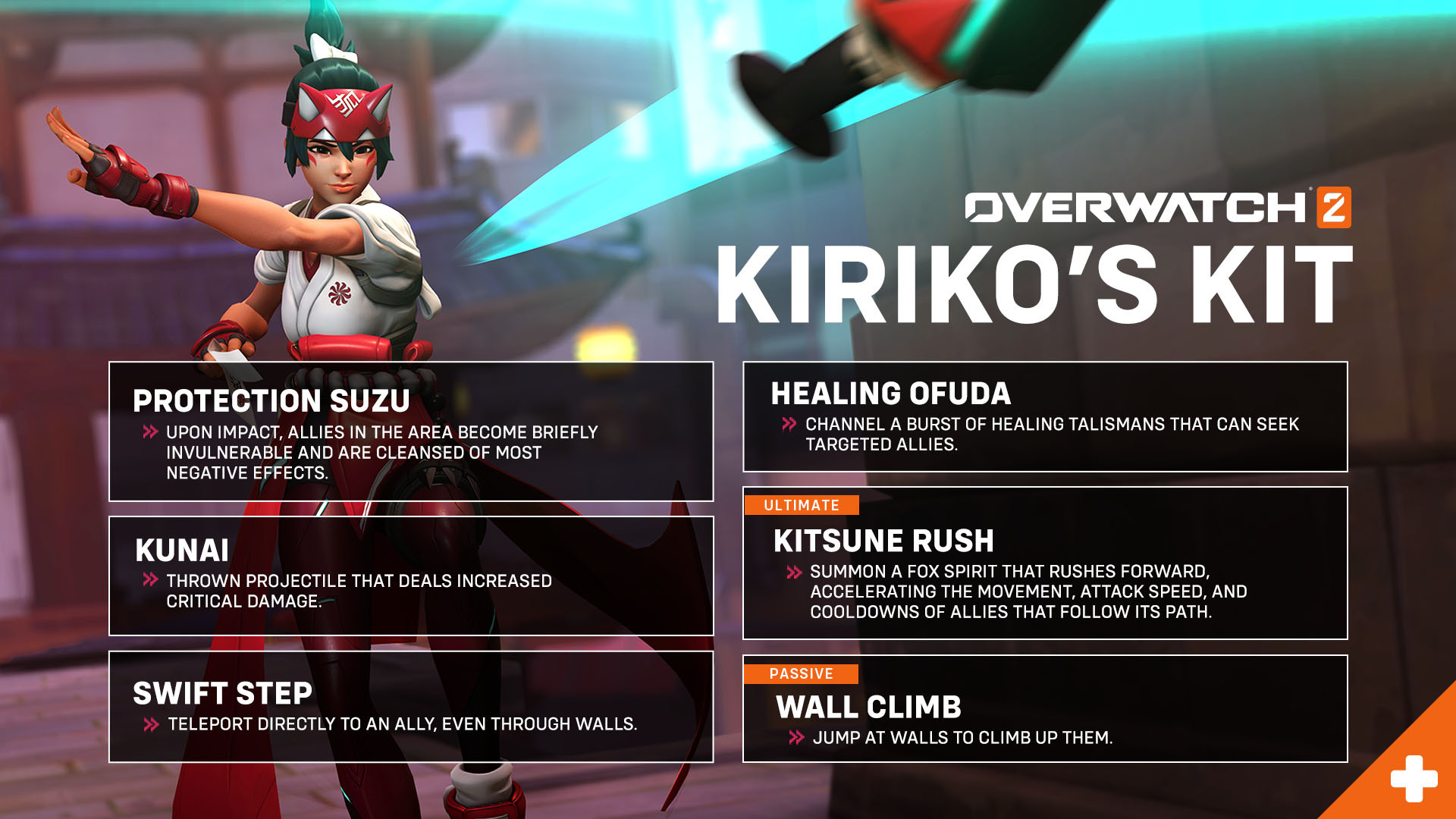 Protection Suzu is a small, bell-shaped projectile that makes allies briefly invulnerable and cleanses negative status effects when it impacts the ground or an ally directly. The ability affects all allies within a small area of effect (AOE), including Kiriko if she throws it at her feet.

“We wanted to make Protection Suzu an active ability that Kiriko could use to defend and engage with her team,” says Noh. “We want to enable players to use this ability actively instead of holding onto it as a response to other abilities.”

During the Overwatch 2 Beta, Noh explains, this sort of ability-hoarding was something the team saw after Moira’s updates were implemented: “When we changed Moira’s damage orb to Necrotic Orb, players held onto the ability for long periods of time.”

The brief immortality, paired with a cleanse, provides Kiriko with a chance to save teammates from negative status effects and death blows. Protection Suzu is the source of a lot of Kiriko’s utility, but it’s come a long way since we first started ideating on it.

The first idea for this ability was a smoke bomb inspired by her ninja training; however, early playtests led to some interesting observations.
“We tried a vision occlusion that blocked enemies' sight,” says Noh, “but the game would become one giant smoke cloud with a Kiriko on both teams.”

Teams also began to develop interesting playstyles around the ability.

“Instead of using the smoke bomb as a tool to disengage, teams would throw it ahead of them and use the visual cover to pop up in front of the enemy team,” Noh recalls from internal playtests.

Ultimately, the final version of Protection Suzu fits with Kiriko’s narrative, while also serving an important function not currently present in-game. Although strong, this ability does come with a cooldown that requires diligent judgement and timing. Enemies will watch for this ability prior to using ultimates and initiating fights.

Kitsune Rush is Kiriko’s ultimate ability. She opens her ultimate by saying, “Let the Kitsune guide you,” and she summons a fox that rushes forward, creating a glowing path for her team in its wake. This path gives Kiriko and her allies a buff that increases the speed of all allies’ actions, including movement speed, rate of fire, and cooldowns. Kitsune’s path is marked by gateways, and allies need to be within the gateways to get the buff. Stepping out of the path will remove the ultimate’s buffs.

“The fox is central to Kiriko’s design, and her ultimate felt like a natural place for the fox to come out,” explains Noh.

Kiriko works alongside her fox similarly to how Genji and Hanzo work alongside their dragons.

Kiriko is a natural leader, and her ultimate ability reflects this. Kitsune Rush is a linear path that encourages teammates to move forward into a fight or objective. Kiriko can direct her teammates with this ultimate, making space for them to engage in fights or capture specific areas of a map.

She’s cunning, agile, and a bit of a trickster. Although light-hearted, she’s a powerful protector with a strong moral compass and believes in taking care of the people around her.

“Our goal with her story was to celebrate the powerful women on our roster,” Min explains. “Kiriko is a strong human with strong values and convictions. I definitely put my “kick ass” woman pants on to write for her.”

Kiriko respects traditions to honor her grandmother, who gave her last name to hide and protect her. But she recognizes the need to change, adapt, and progress, just like her mother. As Kiriko would say, "You can't change the world by following all the rules.”

Kiriko will debut with the Overwatch 2 launch on October 4, and we can’t wait to see how players interact with her in-game!