A design fit for royalty: An inside look at her majesty, the Junker Queen

Junker Queen joins the Overwatch 2 roster as the newest tank hero with a big axe and even bigger ideas. As we saw in The Wastelander cinematic, the Scrapyard’s sovereign is fierce, resourceful, and no stranger to survival. And now, she’s come to claim her rightful throne.

Junker Queen’s playstyle and kit were built from her pre-existing Overwatch lore. The Junkertown map showcases her tough, almost brutal, personality, and we wanted her abilities and playstyle to match that energy. This type of design—constructing a character’s kit to match their established identity—is called top-down design. Junker Queen was in Overwatch’s narrative well before we had a design for her kit, which meant she had big community expectations resting on her stately shoulders. Now, as she steps out of the lore and into the light, let’s jump into the design of her kit and check out how you can expect her to play. 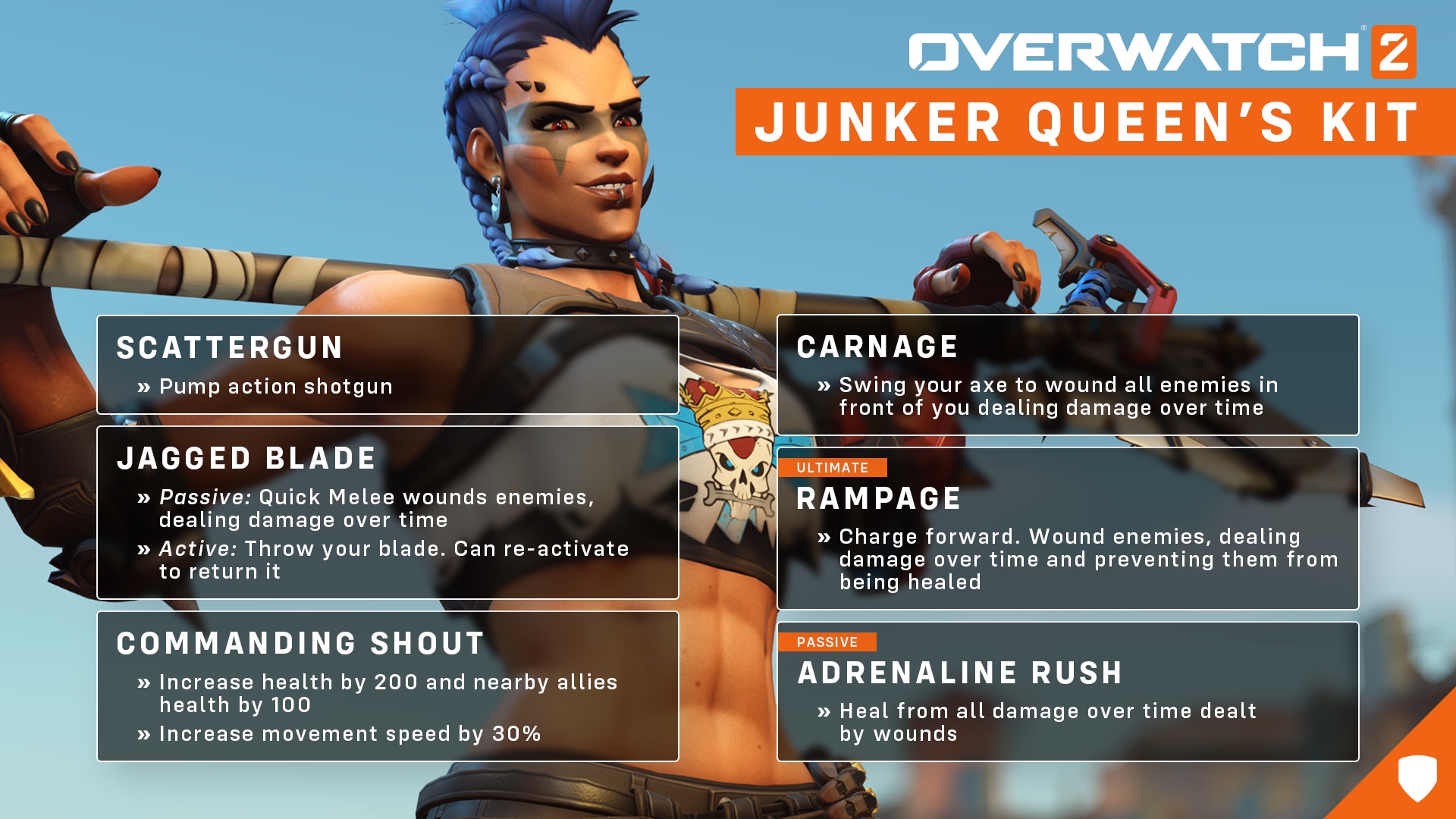 Adrenaline Rush is the cornerstone of Junker Queen’s identity as a tank. The passive ability heals her from all damage over time dealt by wounds. Many of her abilities apply wounds that cause enemies to slowly drain health. This life-steal passive adds to her survivability and aggression. Pushing the boundaries of brawling, Junker Queen feels more like a berserker tank whose survivability is directly connected to how many enemies she’s wounding.

All of Junker Queen’s abilities encourage her to get up-close and personal with her enemies, so we equipped her with a primary fire that fits her playstyle. Scattergun is a pump-action shotgun with a small spread that makes it extra scary at short range.

Adrenaline Rush and Scattergun enable her to play into enemies while giving her the survivability she needs to make space for her team and fulfill her tank role.

Junker Queen’s character has always been depicted with an axe, so that was the starting point for her design. Carnage consists of a big, sweeping swing that wounds all enemies in front of her, dealing damage to them over time and activating Adrenaline Rush. Junker Queen refers to her axe as “Carnage,” further inspiring the importance of this ability in her kit. We thought her axe might work as her primary weapon, but historically, making a melee hero in Overwatch has come with its own set of challenges. For example, Genji’s Dragon Blade used to be his primary weapon, but didn’t translate well in-game; in the end, it was transformed into the powerful Ultimate players know today. We didn’t want to take Junker Queen down a similar path, so we incorporated her axe into this ability.

The original iteration of Carnage let her throw her axe following the initial swing before recalling it back to herself with her magnetic gauntlet; however, when implemented, the practice of throwing her axe felt wrong. It led to a rigid playstyle that didn’t allow for the use of other axe-based abilities while her weapon was out-of-hand, so the throw was swapped to a slash with a wound effect. The concept of throwing and recalling her weapon eventually led to her next ability: Jagged Blade.

Jagged Blade is Junker Queen’s secondary fire and comes with both active and passive abilities. The active ability triggers when you press secondary fire, causing her to throw the knife in her off-hand. Her knife, which the Queen calls “Gracie,” applies a wound that causes damage over time if she lands a direct hit on an enemy. Her magnetic gauntlet can recall the knife by re-activating secondary fire. Recalling Gracie will pull any enemy that’s been directly hit, so be wary of your surroundings—if you’re struck by Gracie, you’re heading straight for the Queen.

Jagged Blade isn’t the first time the team has experimented with throwing a weapon. When Reinhardt was first prototyped, he was able to throw his hammer into the enemy team—an ability that was cool in theory, but awkward in practice, requiring him to go pick up his hammer to defend his team any time he threw it. Despite not making it into Reinhardt’s final kit, this prototype ability heavily inspired Jagged Blade. Throwing a weapon made more sense for Junker Queen, who possesses a special magnetic gauntlet that she can use to pull things around her. We didn’t want the gauntlet to make her feel too mage-y or similar to Sigma, who can lift people up and throw them around. Instead, Junker Queen uses her magnetic powers to control her axe and knife as a vicious means to serve her brutal ends.

To make her even more intimidating up close, Jagged Blade’s passive ability wounds enemies when using Quick Melee when the knife is in her hands. These abilities that apply wounds all serve her life-leech passive, Adrenaline Rush.

To enhance her tank-iness, Junker Queen is equipped with Commanding Shout, an ability that heightens her own survivability while also helping her teammates around her, increasing the health and movement speed of both herself and any nearby allies. As the first team movement speed buff since Lúcio, Commanding Shout helps Junker Queen close the gap between her and the enemy team. Her ability to close distance was intentionally designed as a movement speed buff, rather than something sneaky like a short dash or teleport, because this helps reinforce her nature as someone who sprints headfirst into battle. She brute forces her way through her opposition with a relentless aggression that demands space. It furthers her effectiveness to take charge and lead her team into battle through tight chokepoints or to cut off flanking enemies.

Like, Commanding Shout, Junker Queen’s ultimate ability charges her into the fray.

Rampage is Junker Queen’s Ultimate. It charges her forward, grievously wounds enemies, and prevents them from healing. It’s the first ability since Ana’s Biotic Grenade to apply an anti-heal. Paired with Adrenaline Rush, Rampage is one of Junker Queen’s strongest survivability assets; it applies a deadly wound to anyone in its path, giving her the potential to restore a significant amount of health with Adrenaline Rush depending on the number of wounds she manages to apply.

Initially, her Ultimate was a spinning whirlwind-type ability, but we wanted to incorporate her magnetic gauntlet into her Ultimate ability. We didn’t want it to feel elegant or magic-influenced, either, because it didn’t align well conceptually with character, so we tried to push her magnetic gauntlet to its limits. Rampage charges her gauntlet and creates a cloud with her knife and axe around her while she charges into the enemy team—it’s a display of the raw, visceral power she possesses as Queen.

A new Queen, born to rule

Junker Queen was built for Overwatch 2's 5v5 playing field. She has an unparalleled ability to claim space, and she is terrifying to deal with up close. She’s brawly, toeing the line of a berserker tank, and we were cognizant of that in this new tank paradigm. Tanks play more aggressively in Overwatch 2, and Junker Queen is certainly no exception—in fact, she’d consider herself the rule.

We're excited to see players Rampage through the upcoming beta with our newest tank!