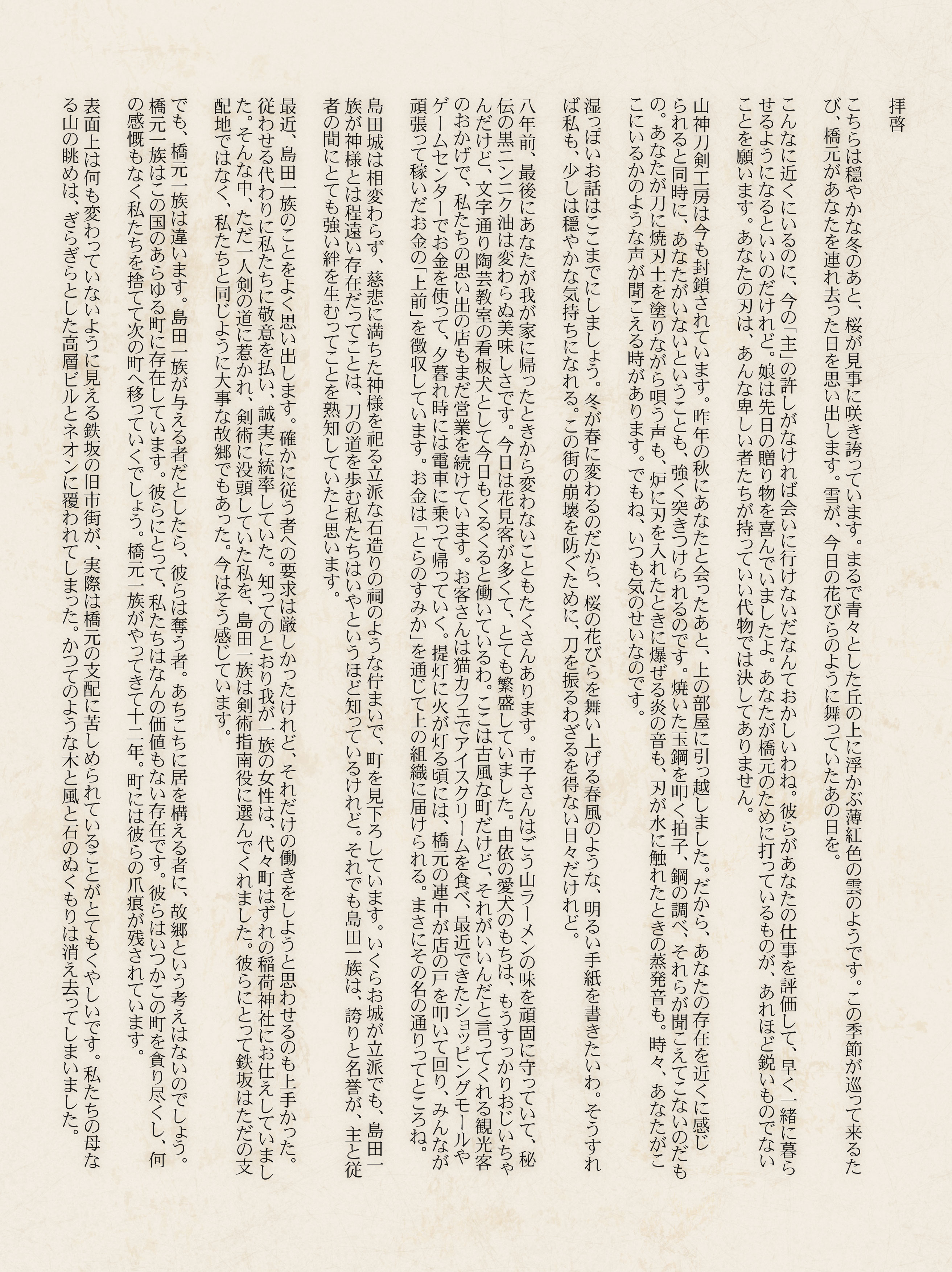 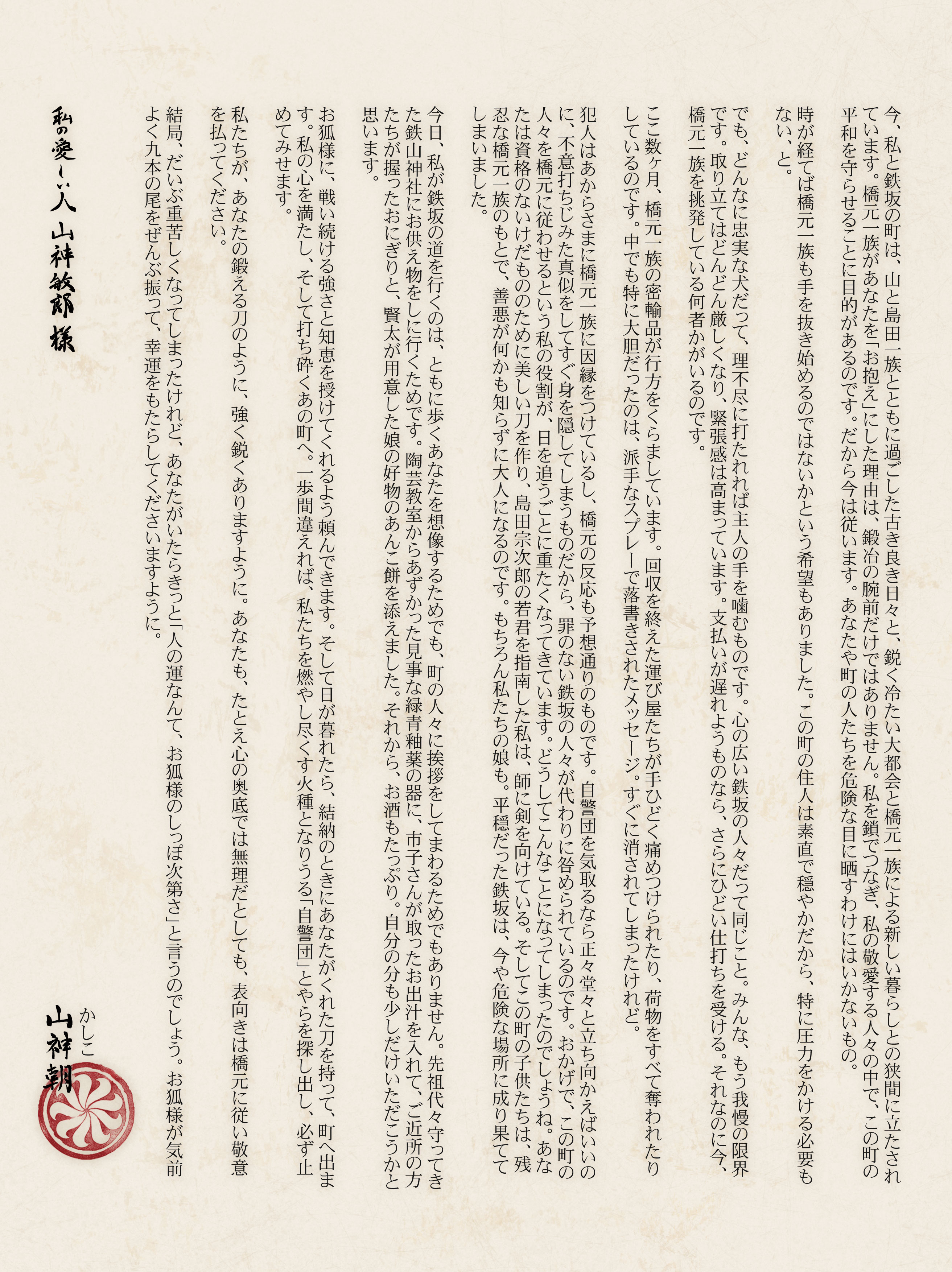 The cherry blossoms are in glorious bloom after a gentle winter, soft clouds of pink against the green trees on the hillside. The season returns me to the winter day when the Hashimoto took you away from us, when snowflakes fell as the petals do now.

Strange that we are so close, yet we can visit you only when our current “masters” wish it. I hope they value your work enough to bring us together soon. Our daughter appreciated your recent gift, though I pray the blades you forge for the Hashimoto aren’t nearly so sharp, that what you craft for them is only equal to their sordid selves.

The forge of Yamagami Blades remains locked up tight, and since we last saw you in the autumn, we have moved into the upper level. It helps us feel close to you in many ways. In other ways, I feel your absence even more keenly. The musical hammering of the hot tamahagane, the song of the steel, is missing from this place. So is your own voice, your singing to the sword as you brushed it with yakibatsuchi, and the crackle of the fire when the blade hit the forge and the hiss as it cooled in the water. Sometimes I think I hear you there, yet it is always only the wind.

But I will not linger here. For as winter leads to spring, let me write a letter of lightness—a warm breeze bearing drifting blossoms. Perhaps it will grant us both a little peace, even as I turn my blade to keep the peace here from shattering altogether.

Many things remain unchanged, of course, in these eight years since your last trip home. You will doubtless be pleased to hear that Ichiko refuses to change the family recipe at Gozan Ramen, and the black garlic oil is as delicious as ever. It was crowded today, as many have come to celebrate the cherry blossoms. Yui’s dog, Mochi, is getting on in years, but his likeness still spins on the sign of the pottery school. Most of our favorite places are kept alive thanks to the tourists who delight in visiting quaint old towns such as ours. They eat ice cream from the cat café and burn their yen at the arcade or the new shopping mall you have yet to behold. Then, happy with their souvenirs, these day visitors skitter back onto the train before nightfall, when the lanterns flicker to life and the Hashimoto pound on closed shop doors, taking their “share” of what is earned by the labor of others and funneling it up to their betters through the aptly named Tora no Sumika.

Shimada Castle still sits high in its place of glory, overlooking our city like a stalwart stone temple awaiting a benevolent deity. You and I know well enough, we two who make and wield the sword, that while their castle was indeed strong stone, the Shimada were no gods, but people—and criminals at that. But the Shimada understood that honor and loyalty forge the strongest bond between ruler and ruled.

Lately, the Shimada have consumed my idle thoughts. They asked much of those who followed them, but they inspired us to give it. And in return, the Shimada clan led with integrity and treated us with respect. As you know, my mother and hers before her were honored to tend the fox shrine far from the clamor of town. But when it was clear my soul longed for the sword and I excelled at kenjutsu, the Shimada chose me over all others as their swordmaster. They knew that Kanezaka was not just the seat of their power, it was their home . . . and ours, too.

But where the Shimada gave, the Hashimoto take. After all, when one has many homes, one has none—and the Hashimoto clan claws at nearly every city in this nation. We are nothing special to them; one day they will drink us dry and move on, leaving us empty and broken. Even now, some twelve years on, I see the mark they have left on our city.

I regret that, even though the old part of Kanezaka appears outwardly unchanged, it has suffered under the cruel hand of the Hashimoto. Our view of the motherly mountain now encompasses the jut and arrogance of skyscrapers and neon, not the warm comfort of wood and wind and stone as it once did.

I stand, as Kanezaka itself does, between the old ways of the mountain and the Shimada and the new, sharp, hard ways of the city and the Hashimoto. We both know that the Hashimoto have you in their “care” not only for your skills, but also to keep me in my place—to ensure that I do not falter in their charge to keep peace in this city, among these people whom I respect so much. I will obey our current masters, for to do anything else will put both you and our friends here at risk.

I had hoped that over time the Hashimoto would grow lazy. That they would see we are an honest people whom they need not oppress.

Not even the most faithful dog could take such a beating without biting back—and the people of Kanezaka are great of heart. We are being worn down. The demands upon the populace are increasing, and tempers are rising. Missed payments are met with more vicious abuses. And now someone has given the Hashimoto further reason for anger.

Over the last few months, shipments of Hashimoto contraband have gone missing. Their men have been badly beaten or robbed when returning from their rounds. Perhaps most boldly of all, messages painted in bright, conspicuous colors have started to appear, though they are quickly painted over.

These fools are not so subtly throwing in-nen at the Hashimoto, and their acts are received as well as you would expect. These vigilantes think to rise strong against a tide of violence. Instead they strike fast—and hide faster—while the good people of Kanezaka take their penance. And so my job—to keep our own people, our friends, in submission—has become both more delicate and more vital with each passing day. There are moments when I can scarce believe the world in which I walk now: You, making beautiful work for undeserving pigs. I, who trained the scions of Sojiro Shimada, forced to turn my swordmaster’s blade against my own. The children of this town, growing to adulthood with only the brutal, thoughtless Hashimoto to determine what is good or bad . . . our daughter among them. It is dangerous in this city now.

I will walk through Kanezaka today not simply to imagine you walking beside me or to greet our neighbors. I have made an offering to take to the Tetsuzan Shrine of my ancestors: A bowl coated with brilliant blue-green yuyaku from the pottery school, into which Ichiko has ladled a splash of dashi. A rice ball from our neighbor. From Kenta, a piece of red bean mochi—our daughter’s favorite. To all this I have added a generous pour of sake. I may have poured a small cup for myself as well.

I will ask the fox spirit for strength to continue this fight and for wisdom for myself and for all of us. Then, after sunset, I will take the sword that you gave me so long ago at our yuino and patrol the streets of this place that both fills my heart and breaks it. I will find these self-appointed “guardians,” who, if not deterred from this path, may be the spark of a misguided and deadly fire that will consume us all.

May you and I both be as your blades are: strong and sharp. Obey the Hashimoto, as I must, and give them the outward show of respect, even if you cannot give true respect a home in your heart.

I will close on the lighter note that I promised and say that I know if you were here you would remind me, “The kitsune can change your luck with a flick of even one of her tails.” May she flick all nine of them and send some much-needed good fortune our way.