Freeze the Day: Behind the Newest Winter Wonderland Brawl

It’s not every day you get to use your teammates as literal bullet sponges (Roadhog aside) in a close-quarters firefight. Grab your pulse pistols, don your coziest skin, and get ready to get cold—Freezethaw Elimination, the newest Winter Wonderland brawl, is here. Instead of dying in this brawl, players are frozen solid in blocks of ice that their teammates can thaw (or choose to utilize as sniper cover while they attempt to pull off that perfect headshot). It’s an Overwatch version of freeze tag, one of the popular Workshop modes enjoyed by players in the Arcade.

This new game mode is the brainchild of associate level designer Trey Spisak, whose spark of holiday brilliance during the team’s annual game jam—also the source of the Overwatch Workshop—led to the icy inception of yet another way to play.

Catch up with Spisak and learn more about working on the Overwatch team and what it takes to design event brawls.

Let’s start off with a bit about you. How’d you get started in the industry? What led you to Blizzard?

I was an avid World of Warcraft player and happened to know a couple of people working on the Quality Assurance team around the time who loved what they did. I was super interested in getting involved in game development and ended up applying and got hired! I helped test a bunch of our games including World of Warcraft: Wrath of the Lich King, WoW: Cataclysm, WoW: Mists of Pandaria, Diablo III, StarCraft II: Wings of Liberty, and of course Overwatch! I started to study level design and scripting in my free time and applied for the Overwatch team when the opportunity arose—the rest is history!

What’s your role on the team, and what projects have you worked on for Overwatch?

I am an Associate Level Designer, so my focus is on designing and building awesome levels for our Heroes to play in. That being said, I love to work on all aspects of design and tend to take the opportunity to work on something new when the chance arises! I have worked on many new PvP (player versus player) and PvE (player versus environment) maps for Overwatch 2, but my latest contributions to Overwatch were the elevator update on Hollywood and Volskaya Industries and, now, Freezethaw Elimination.

What tools do you use to work?

Most of the work is done using our in-house editor, TED, which stands for Tank Editor, the name of our engine, though some of us lovingly refer to it as Theodore. I spend most of my time in our level editor and our visual scripting system known as Statescript. I also use Adobe Illustrator when working on any sort of 2D level design. 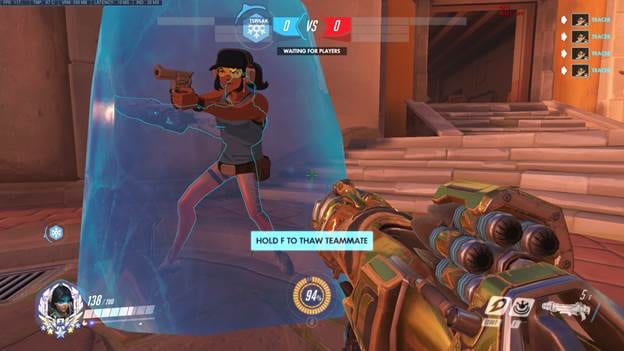 This brawl evolved from a game mode design I came up with during a yearly team event we call Harvest Fest. Every year, just before Thanksgiving break, the entire team is given the opportunity to work on any project that they think would add fun to Overwatch. We generally pitch our idea and recruit a small team from other disciplines to help with the areas we don’t normally work on. I had two and a half days, so I decided I wanted to make a riff on one of our existing game modes.

I started jotting down some ideas for different game modes and ultimately ended up deciding to work on a freeze tag variant. The design evolved from there and the game mode ended up being a lot of fun! I got a ton of great feedback on the mode, but it never went anywhere from there. When the opportunity arose to work on the Winter game mode for this year, I immediately jumped on it so that I could bring this game mode to all of our players! I prototyped the initial design and started to iterate based on feedback and based on what I noticed from playing in and spectating Freezethaw Elimination playtests.

One of the biggest challenges was working through all of the cases where certain hero abilities or functionality wouldn’t work correctly because players don’t technically “die” in this game mode—with the exception of environmental kills—as they are frozen at one health instead. For example, Mercy’s Resurrection suddenly became very useless when no one dies on the battlefield, so we asked the question, “How can we make Mercy feel great in this mode as well?” In order to solve this problem, I ended up allowing Mercy to use her Resurrect ability on frozen targets. I provided similar support to Mercy’s Guardian Angel so that it can still be used to dash and glide to frozen targets.

The best part about working on a new brawl like this is getting to watch it come together and improve week by week thanks to the contributions from all the teams involved. This was also my first major design contribution to the live game, so it was a lot of fun to be the lead designer on this feature.

Were there any funny moments that stuck out to you during the iteration process?

Absolutely. While fixing an issue where D.Va’s mech would not go below one hit point, we noticed that whenever we tried to kill D.Va, she and her ice block would fly across the map! As it turned out, there was some wonky logic occurring that caused the ice block and D.Va to fight for the same location that caused their collision capsules to push each other away at the same time.

What do you hope players will enjoy most while playing the brawl?

I really hope that our players enjoy the comeback potential available to them in each round. When else do you get to use your teammates as solid cover? Also—don’t forget to tag their ice block with a spray!

Overwatch Winter Wonderland is back! Celebrate the most wonderful time of year by teaming up with your friends to play Freezethaw Elimination. Plus, unwrap a sleigh-load of cosmetics and win weekly rewards now through January 5!