You’ve pulled off incredible POTGs, pushed millions of payloads, booped your foes off the map and into oblivion, and danced your way into the hearts of your teammates. It’s been an incredible four years of Overwatch. For the Overwatch team, it’s also been years of ingenuity, of creating a game that is a love letter to an auspicious future in which anyone––soldiers, adventurers, scientists, oddities––can become a hero. Years of art, engineering, programming, and development to bring together millions of players worldwide and foster the creation of bonds and memories. And, since the inception of Overwatch, we’ve made countless memories of our own.

To commemorate the game’s fourth anniversary, a few team members took the time to share some of their favorite moments from the development of Overwatch and the past several years of fun that the game has brought.

Once upon a time, when trying to figure out how Brigitte’s flail works, a teammate and I were jamming out on ideas. There was a difference between the flail’s original animation concept and the current implementation of how the flail behaved in internal playtests. The design team liked how the flail was moving on the server, and we wanted to see if we could make sense of the art moving that way. As a result, I grabbed an Xbox controller with a cord, and started swinging it around, pulling the cord with my other hand to cause the controller to come back to my hand. We ended up deciding the motion was more like a ball-and-cup toy than an actual flail, and that helped wrap our heads around the animation.

Another great memory––someone on the internet was confused about what a character designer was. They thought that lead hero designer Geoff Goodman drew up the concepts for all the heroes. Goodman, who found that thought hilarious, replied to the email with a joke stick figure Tracer. To keep the joke going, I made a skin out of Goodman’s brilliant concept: 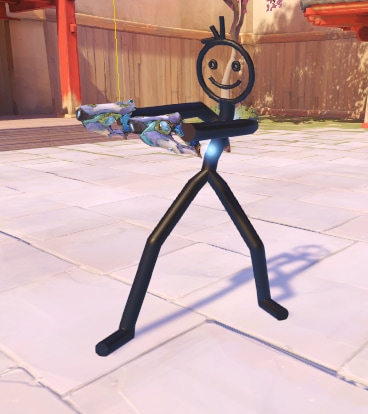 Hanzo was the first character we made who could run on walls. This video shows how the game simulation looks before we polish it with animations, tighter timing, and visual and sound effects.  It’s important to make any gameplay mechanic functional and (reasonably) fun before we engage our exceptionally talented art staff at polish and finalization. Hanzo is in early development here, so I think we’re repurposing Reaper’s body animations plus a single pose for Hanzo’s first-person animations.

In the video, I’m chasing our lead hero designer, Geoff Goodman, around an early version of Temple of Anubis. Simulating wall run is much easier in realistic, man-made environments; most walls are straight up and down. In Overwatch, you’ll be hard-pressed to find a wall that is perpendicular to the floor and ceiling. It looks great, but it makes our wall-running arithmetic a bit spicy. Still, I was thankful we could iterate on this prototype in a representative Overwatch level to work out the kinks. This video shows a proof-of-concept wall run that has evolved significantly since this early prototype. We eventually split the vertical wall climb (for the Shimada brothers) from the horizontal wall ride (for Lúcio). Gameplay engineers, like me, are responsible for creating and supporting all the wacky game mechanics our cast of heroes bring to bear. As we tell people who aren’t familiar with what we do, “gameplay engineers are the ones who make Mario jump.” We’ve somehow managed to jam 32 games into one, as each hero poses new challenges to game simulation, feel, and fun. For gameplay engineers, Overwatch is the gift that keeps on giving.

My fondest early memory is from my first day on the team; I was nervous to meet everyone but so excited to be there. I knew I was in the right place when the first question Jeff Kaplan ever asked me was about my cat. Another good memory I have is from just before the winter shutdown in 2019. We were all at a restaurant for the Overwatch team holiday party. The DJ was on point and had karaoke going. I’ll never forget the entire team singing the Pokémon theme song together.

Team 4—known publicly as the Overwatch team—conceived of the idea of Overwatch in the summer of 2013. While the times were filled with uncertainty, we bonded as a group of craftspeople, dedicated to building a new Blizzard universe. Our vision was one of a bright, hopeful future and featuring the most epic, over-the-top, loveable heroes we all wished we could be. Our goal was always to announce this new game at BlizzCon 2014. As the team navigated the challenges of developing a new game, we hit all of our milestones and ended up in the unlikely position of approaching BlizzCon 2014 without even the slightest rumor of the game existing. In what was Blizzard’s possibly best kept secret, I had the honor of standing backstage with Chris Metzen as we awaited our turn to go out onto that big stage in the main hall and introduce the game for the very first time. For me personally, I had not been a part of BlizzCon publicly since 2008, when I was a part of the Wrath of the Lich King team. But Chris was always everyone’s favorite part of BlizzCon. He was one of us and he spoke for all of us. Team 4 knew that if anyone was to announce our game, it had to be Chris. That’s why I was blown away when Chris asked me to come out to talk about the game after he announced it. I was both humbled and honored.

So there I stood, in the magical darkness of the BlizzCon backstage wings, watching Chris prepare to share this thing we had been working on with the world. I knew all of Team 4 was sitting out in the audience with their families and loved ones, emotionally waiting for this moment. I remember thinking to myself, I wish the whole team could be here with me right now and watch Chris take that stage. That’s when I took out my phone and filmed him—because I wanted Team 4 to be able to feel the moment with me. In the brief 36-second video you can hear my good friend Dustin Browder, the game director of StarCraft II, wrap up his speech and call Chris out. You could feel the energy of the tens of thousands of fans packed into that room, and knowing that there were tens of millions more watching around the world, I felt the butterflies fly out of my stomach and take the stage with Chris as he introduced the world to Overwatch.

Celebrate the fourth anniversary of Overwatch by unlocking a slew of new cosmetics, earning weekly rewards by winning games, and playing all of your favorite seasonal brawls - celebration ends today!