Overwatch concept artist Qiu Fang has a knack for envisioning rugged, outdoorsy characters. Four years ago, when he was an art student with aspirations of becoming a character concept artist, Fang began a personal project depicting a ragtag group of nomadic hunters. The concepts displayed careful control of a muted color palette, precise line art, and small details of equipment and improvised technology that hinted at a world beyond the images.

Fang was proud of his work, but he never expected what happened next: The Overwatch team found his project and recruited him.

“Everything in Qiu’s design seemed to have purpose and function,” says concept artist David Kang, who stumbled across Fang’s work on the portfolio website ArtStation. “I loved that he had a lot of experience not only in fantasy but with functional mechanical tech.”

After a successful series of interviews, Fang left school and joined Blizzard. Now he uses his considerable artistic powers to bring the world of Overwatch to life every day. We caught up with Fang to discuss one of his recent designs, Little Red Ashe, a folk tale–themed skin introduced for this year’s Overwatch Anniversary event. 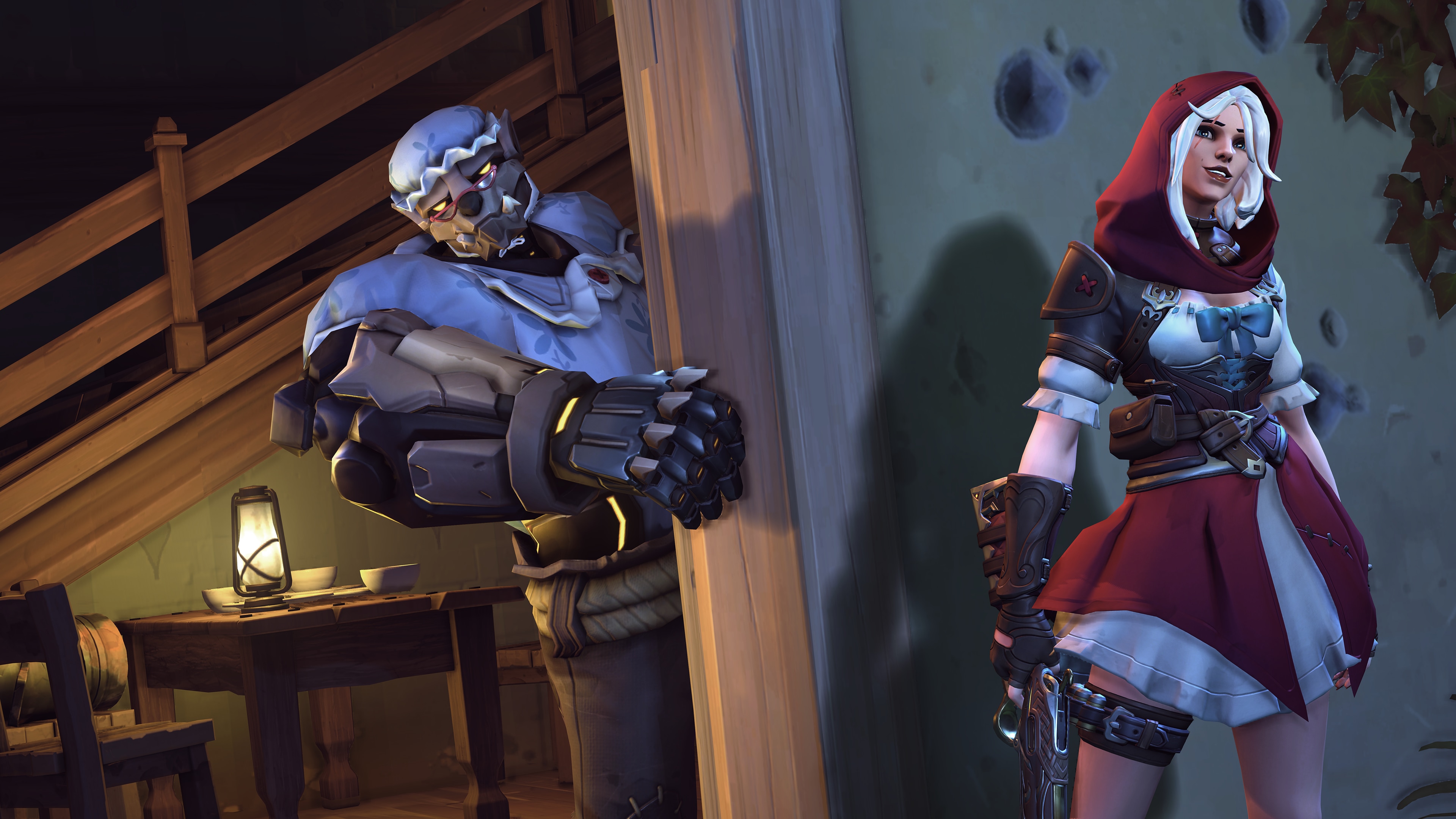 Hi, Qiu! Can you share the story behind Little Red Ashe?

This was kind of my pipe dream since we started thinking about skins for Ashe. In my head, this is a badass version of Little Red Riding Hood where she subdued the wolf and became an outlaw; Ashe was the perfect blend of sassy and cool for the role.

Why Little Red Riding Hood? What part of the folk tale drew your attention?

The first time I saw Ashe, I thought she had this tough huntswoman gunslinger vibe. The Little Red Riding Hood and Big Bad Wolf theme evolved from there naturally.

My goal in character design is to create a sense of story and worldbuilding. Skins are a fun challenge, since you’re dealing with an existing character with a set personality. It’s fun to think about these heroes living a different life in an alternate universe.

Could you elaborate on the challenges you faced when designing this skin in particular?

There were two main challenges for this skin: finding interesting supporting visuals on the costume and deciding which angle to tackle the Big Bad Wolf from. I wanted to show a bit of story. One of the Big Bad Wolf’s chipped teeth can be found on a bracelet around Ashe’s arm... and he never even got to change out of his “Grandma” disguise.

Another challenge was to put Ashe into a red riding hood and a white dress without making it look like a cheap costume. I ended up going more for a rugged, battered look, with rips and tears and scars and a more protective leather corset. I imagine she’s lived and hunted in the forest for years. That helped connect the raw attitude of the character with the otherwise innocent white dress.

For Bob, getting the right balance of “grandma” and “robot wolf” was key. I never would have thought that one day I’d be doing so much research on grandma gowns and night caps...

Overall, would you say you enjoyed working on this skin?

I was definitely giggling to myself a little while going through this skin. It was a lot of fun to work on!

Want to outfit your own Ashe with rugged woodland attitude? Little Red Ashe, along with many other Overwatch Anniversary skins, will be available to unlock through June 9, 2020.