The Overwatch community is always evolving alongside the game, becoming more in tune with the game’s intricacies and discovering and sharing new high-level approaches to play. Today we’re introducing a brand-new Role Queue system to help ensure Overwatch matches continue to be fair and fun well into the future, and create an environment that fosters teamwork and encourages players to bring their very best to every match.

Currently in Quick Play and Competitive Play, a lot of important decision-making happens in the 40 seconds before a match even begins, as everyone selects their heroes and responds to others’ role choices. It’s not uncommon for players—who may all have different goals and play styles—to feel tension, pressure, disappointment, or even hostility as a team composition comes together. The Role Queue system is designed to help take the edge off this process, ultimately leading to matches that feel fairer and more fun, where players are in roles that they want to be in.

With Role Queue, we’re updating the matchmaking and queuing systems in Competitive Play and Quick Play so that players choose which role they want to play—tank, support, or damage—before a match even begins. The matchmaking system will then match two tanks, two supports, and two damage heroes to create a team, and upon entering match, players will select heroes within their chosen roles. At the end of a match (in both Competitive Play and Quick Play), players will return to the main menu and select their role before queuing for the next game.

Each of the three roles will have its own queue, and players will be able to see estimates for the wait time for each at the role-selection screen. Several factors go into those estimates, but they’ll generally reflect the number of players queuing for a particular role. To help incentivize a more even distribution of players across all roles, players who queue for roles that are currently in high demand may get a reward.

We believe that Role Queue will improve match quality, give players more control over their gameplay experience, and provide more positive social experiences between teammates. 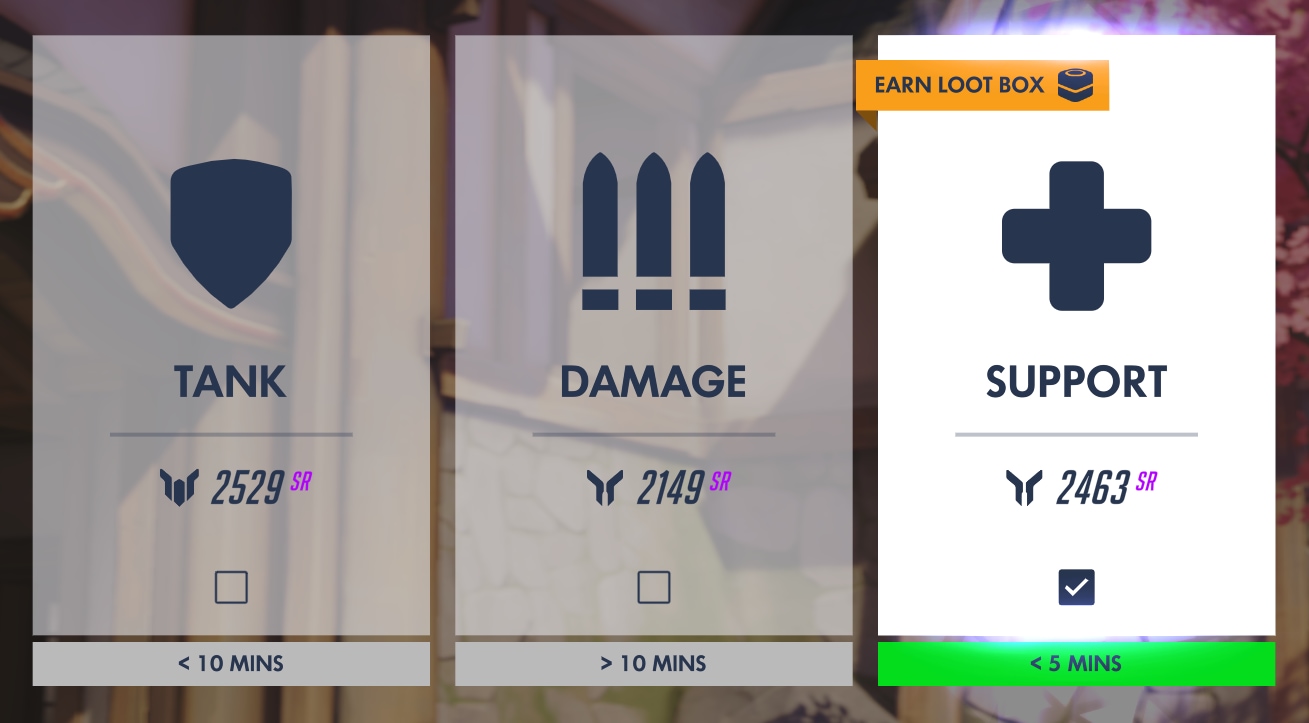 While Role Queue will shake up the team composition meta-game, we also wanted to do a balance pass to make sure every hero is still viable and useful to play. Role Queue affects hero balance significantly, especially for heroes such as Brigitte who was most potent as a third Healer or Tank. With our Role Queue hero updates, we’re updating Brigitte’s kit to provide more healing overall while decreasing her survivability to help solidify her as a Support hero. Read more about Brigitte’s changes and all hero updates in the Patch Notes.

In Quick Play, the Role Queue system will allow us to determine each player’s matchmaking rating (MMR) on a per-role basis. This enables us to matchmake Quick Play games based on the MMR for each player’s chosen role. In addition to giving players more freedom to play the roles they want, we believe this will also result in games that are fairer, more appropriately matched, and ultimately more fun overall.

Once Role Queue is live, players will earn separate skill ratings (SR) for each role in Competitive Play, for a total of three distinct SRs. This rating will be a number between 1 and 5000, with higher values indicating a greater skill level. Players will also be assigned a tier per role based on their rating—Bronze, Silver, Gold, Platinum, Diamond, Master, or Grandmaster.

As player’s skill rating between roles can vary widely with Role Queue, matchmaking will be calculated using the SR of players’ selected roles. We believe this change will help players feel freer to choose different roles while also creating matches that are fairer and more fun.

Once Role Queue is in the game, players will be required to complete five placement matches in a selected role to obtain their seasonal skill rating for that role at the start of each Competitive Season. If a player would like to earn their seasonal SR for all three roles, they will need to complete 15 placement matches in total—five each per role. 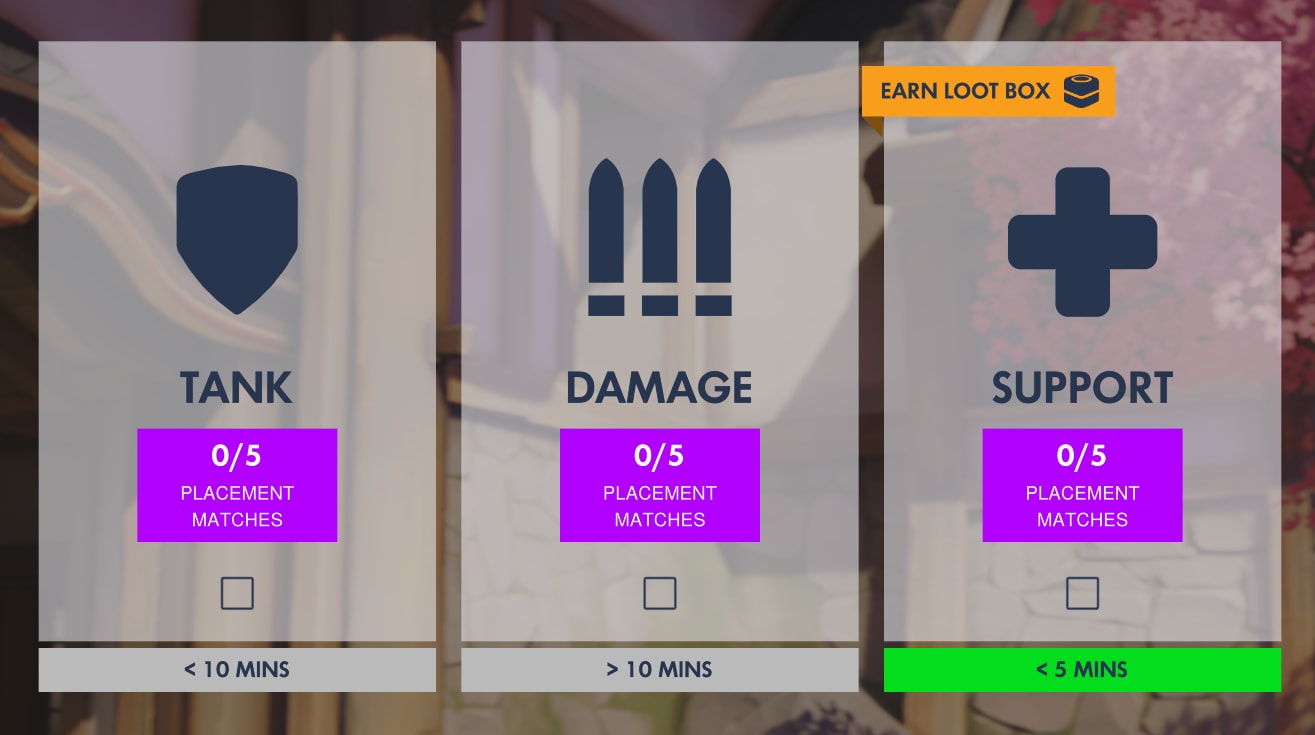 Anyone who completes their placement matches in any role during a Competitive Season will receive a special spray and player icon. And as before, players who complete competitive matches will earn Competitive Points (CP) to spend on golden versions of their favorite heroes’ weapons.

When the season concludes, players also receive CP based on the highest Skill Tier they obtained during the season per role. Instead of granting a single pool of Competitive Points, we’re separating the total across three pools earned by completing placement matches in each role. This change allows for players to earn more Competitive Points overall if they complete their placements in all three roles.

When is Role Queue available?

Role Queue will be fully available for Quick Play and Competitive Play beginning on September 1 for the start of Competitive Season 18.

A 2-2-2 role lock will be implemented for all Overwatch League matches in Stage 4, which starts Thursday, July 25. To learn more about how 2-2-2 works in OWL, please visit their full blog here.

Getting this new Role Queue system right has been a huge priority for us—and after more than a year’s worth of work, we’re excited to finally make it happen. As you’re playing, please bear in mind that this is a brand new skill rating system—you shouldn’t compare it directly to your previous SR, and it may take a while for your role-specific ratings to properly adjust.

As any new feature as significant and complex as Role Queue, we’ll be actively iterating on and improving the system over time. We’ll also be actively monitoring and collecting data throughout the public test region and the Role Queue Beta Season—and as ever, we’re always eager to hear feedback from the community.

We hope that you enjoy the new Role Queue feature—please let us know what you think!