After the dust settles in Junkertown, the snow melts at Volskaya Industries, and the 2019 Overwatch League champions have been crowned, it will once again be time for the nations of the world to collectively celebrate the year of competitive Overwatch® at Blizzard’s annual convention, BlizzCon, in Anaheim, California.

In the fourth year of the Overwatch® World Cup program, teams will form to fight as one unit, rallied under their national flag. Players hailing from the Overwatch League, Overwatch Contenders, and even Ranked Play, will put aside their professional rivalries to compete for the glory of their home countries. Of course, three-time reigning champion South Korea will try to hold onto their dynasty of digital dominance to bring home the Gold Medal once again, but the gap at the top is looking narrower than it ever has before!

We’re making some changes this year. To create the chance of seeing more nations represented at BlizzCon, we’re happy to announce a tournament structure that will offer opportunities for all eligible countries to form teams to challenge for their right to play in the onsite Group Stage. This year, the entire tournament will take place in Anaheim, all within one week of competitive celebration, which will be broadcast live to platforms around the world. 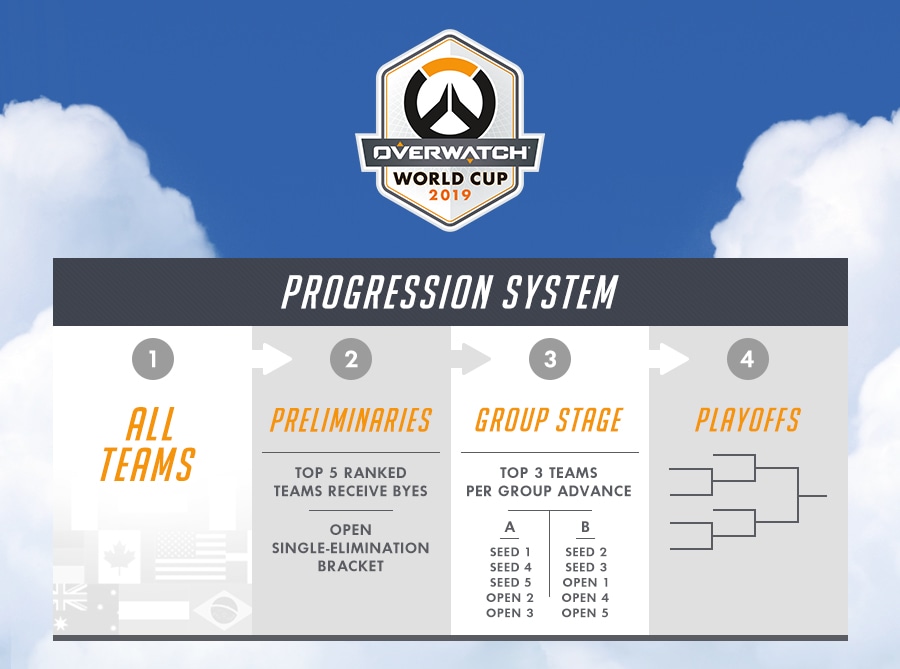 Before the BlizzCon doors open, we will start with the Preliminary Rounds. Fans will be able to cheer on their team and spectate the amazing plays online. After BlizzCon’s Opening Ceremony on Friday, November 1, the Group Stage will commence, with multiple matches being played simultaneously. Finally, the top six teams from the Group Stage will advance to the single-elimination playoff bracket to award the Gold, Silver, and Bronze medals in the BlizzCon Arena on Saturday, November 2.

If you’re hoping to follow multiple teams, fret not! All matches will be fully covered live on broadcast. Additionally, this year we will be bringing international coverage teams to BlizzCon to produce entertaining broadcasts onsite in multiple languages. These teams will have direct access for player interviews, and there will be opportunities for you to submit questions as well, bringing you to the sidelines of the action.

This year, before matches start, countries will be seeded by a weighted point-ranking system based on final placements in the three previous Overwatch® World Cups. Points are awarded along a spectrum ranging from 1 point for a Round of 32 appearance to 10 points for a Gold Medal. The points accrued over those previous years are weighted to favor recency: 100% for 2018, 50% from 2017, and 25% from 2016. Ties between two countries will be settled by the most recent year’s results; then, if required, by the most recent head-to-head results. Competition Committees and players for the 10 highest-ranked teams confirmed to compete at BlizzCon will receive full support for round-trip airfares, ground transportation, and double-occupancy hotel accommodations. All other eligible countries that confirm their attendance will be fully responsible for their travel and will receive some support for hotels.

The Competition Committee voting process is returning with only one minor change. This year, you—the players and fans providing the energy and support for each nation’s team—will also have a say in the General Manager position. We hope this will give you an even bigger voice to help shape how your team is created and managed all the way through the program.

How to Get Involved

Committees will be built via the following processes across Phase 1 (May 15–24) and Phase 2 (May 30–June 9). Player Tryouts and Country Promotion will take place during Phase 3 (June 13-July 14). To be a final Committee candidate or a competing player, you must be over the age of 18 by the time travel is required.

How to Stay Engaged

Follow the @owpathtopro Twitter and the Overwatch® World Cup website for updates at the beginning and end of each Phase. We will reveal your final national competition committees and player rosters through these channels. If there are any questions or concerns, you’re welcome to reach out to us.

Heroes, the stage is set, and the world is watching! Are you ready to support your country and become the 2019 Overwatch® World Cup champions?

Who is part of the official Overwatch World Cup national team that receives attendance to BlizzCon?

What is the format of the tournament at Blizzcon?

Who is allowed to vote?

Where are the rules of the tournament?

What documents do I need to be eligible to participate as part of the national team?