Get Ready for the Overwatch® World Cup

Attention all soldiers, scientists, adventurers, and oddities—the Overwatch® World Cup needs heroes . . . and it will be up to you who answers the call!

The Overwatch World Cup will be an international exhibition pitting teams from multiple nations and regions against one another in a battle for global glory. The celebration begins with communities around the world voting for which players they'd like to see represent their country. Teams will then compete in a series of exhibition matches online and, ultimately, on the BlizzCon 2016 stage!

The inaugural Overwatch World Cup gets underway next month, and whether you’re competing or just want to show your support, we need heroes like you to get involved. Here's how.

Phase 1: Vote for Your Team

In the very near future, certain players who have distinguished themselves within the community will be selected for a chance to represent their nation or region on the global stage. We'll be nominating a mix of representatives from each participating country, including pro gamers, skilled community personalities from the area, and local players who’ve climbed the ranks in Season 1 of Competitive Play.

Shortly thereafter, starting Thursday, August 11, the communities from each nation or region will vote for the nominees they’d most like to see on their country’s team roster. Information on eligible players’ favorite heroes and competitive rankings will be available to help you make informed choices as you make your picks. You must have an Overwatch game license in order to participate, and you can only vote on behalf of the nation or region where your Battle.net account is registered.

After voting concludes and each country’s players have been selected, teams representing multiple different nations and regions will take part in best-of-three, single-elimination online qualifiers, starting in September. Then, at BlizzCon in November, sixteen teams will battle in round-robin group stages and single-elimination finals.

To ensure that all major regions of the world are well-represented at BlizzCon, the sixteen teams competing there will include six from the Europe game region, six from the Asia-Pacific game regions, and four from the Americas. The complete list of countries and regions taking part is as follows: 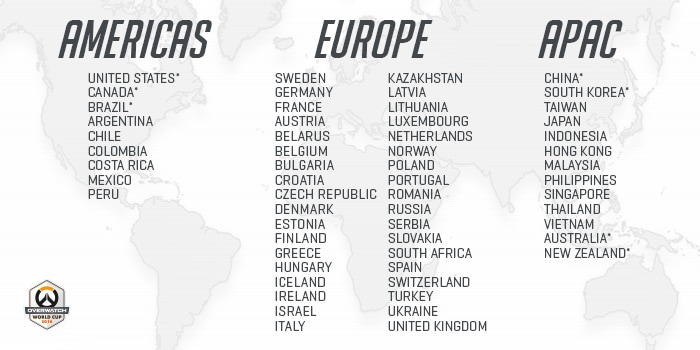 *Due to a variety of factors, including server locations, regional infrastructure and connectivity, and other geographical considerations, these countries will automatically be advancing to the competition at BlizzCon for this exhibition.

Stay tuned for more details on the Overwatch World Cup exhibition, and be prepared to join us as we celebrate the spirit of competition with the Overwatch community around the world!

Q: How does the World Cup fit in with the existing professional Overwatch scene?
A: The Overwatch World Cup is a community-driven exhibition of Overwatch players from around the globe. In keeping with Overwatch’s global theme, we wanted to create a fun and spirited worldwide competition that gives players an opportunity to compete and cheer for a local team—and what better place to do so than on the BlizzCon stage?

Q: How are players chosen to be nominated?
A: Players are nominated based on a variety of criteria, including their skill, in-game performance, community standing in the country, and more. Our goal was to select a well-rounded group of players for the community to choose from to represent their country or region.

Q: Why isn’t my country or region on the list?
A: We’ve done our best to include as many countries and regions as possible for this inaugural Overwatch World Cup event; however, due to the complexities of putting together an international event like this, we weren’t able to include every country we hoped to in time for the start of this year’s competition. Ultimately our goal for the Overwatch World Cup is to include as many countries as possible, and if your region doesn’t have a team this year, it’s possible it may be included in future events.

Q: Where can I watch Overwatch World Cup matches?
A: Matches during Opening Week and at BlizzCon will be streamed live. Stay tuned for additional details.